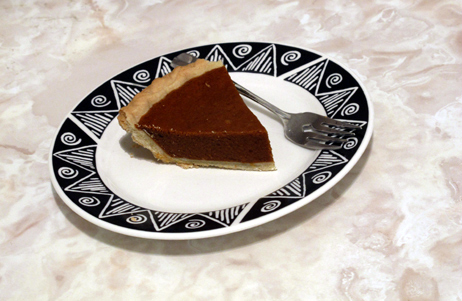 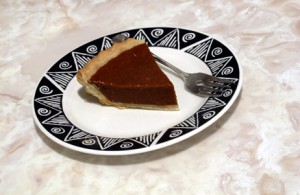 As a gesture of appreciation for our guys and gals who have been in the military, and for those currently serving the country while eating sand in hot, dusty places and generally risking their necks for the rest of us (not to mention being far away from their families), I decided to bake a pie for you all. But not just any old pie.

Building on my happiness with the smoked pumpkin experiment, I got a little more ambitious: smoked pumpkin pie. Turning the smoky squash into a soup with bacon was easy; how can you mess up anything that combines smoke with cured pork?

Smoked dessert is more difficult, especially in this case. Pumpkin pie is an old standby, a classic. You load it up on a fork, take a bite, autumn yumminess follows, you gain a few pounds by overindulging, and make a New Year’s resolution two months later that you promptly forget. It’s like clockwork. Tweaking it would be like inventing new Coke, and we all know how that fiasco turned out. Well, those of us who didn’t spend the `80s in diapers do, anyway.