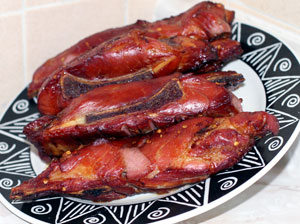 When I first Googled “tea smoking,” most of the results pertained to a recreational activity that had nothing to do with barbecue, although they were pretty damn edgy. Tea-smoke cooking does involve the munchies, but it won’t mellow you out or treat your glaucoma. Sorry to disappoint. What it will do is give a unique flavor to your smoked meat.

This take on Chinese tea smoking was so straightforward, I only needed two plates for the ingredients.

It’s a style of smoking that hails from China’s Sichuan (formerly Szechuan) region, which is known for its hot, spicy cuisine. Serious Chinese food geeks may be familiar with Zhangcha duck—a tea-smoked Sichuan delicacy that’s a bitch to make but impressive as hell to anyone who’s never had it before.  I was going to make one for this article, but the cops at the park kicked me out of my blind and confiscated my shotgun before I could pick off the Mandarin Duck I wanted. Oh, well. It was from the wrong province of China anyway.

A ticket and a body cavity search later, I was at the supermarket looking for an alternative. Tea smoking a chicken sounded a little bland, they had no duck, and I’ve had bad luck with Cornish game hens in the past. That pretty well left me with pork—the other white meat. Swine and I have a long history together, going back to my college days at USC when my roommate Jim Skinner and I invented the leftovers festival affectionately known as Questionable Pork Day.  But that’s another story.

I headed home with 3 pounds of country-style pork ribs and got down to business. Because I’m a tea-smoking virgin (don’t spread that around, BTW), I kept things pretty simple. I started by mixing up the sauce, then let the ribs marinate in it for four hours. 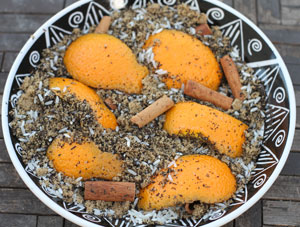 Yes, I know. The smoking mix looks like potpourri. No, you can’t have my man card.

While that was going on, I created the tea mixture. It’s a combination of the tea, some brown sugar, dry rice, cinnamon sticks, and orange zest/peel. Most grocery stores have an Asian food section where you’ll find some inexpensive black Oolong tea; black teas are what’s used for this type of cooking. It’s great if you can find loose leaf tea but if not, cutting open a bunch of tea packets and pouring them into a measuring cup isn’t exactly brain surgery. The rice acts as filler to keep the tea burning longer. Cinnamon and orange zest are pretty standard ingredients for this sort of smoking. They provide aromatics in the smoke. You could also toss in some other whole spices—like fennel seeds or whole cumin—to put a different spin on the process. I made four batches of tea mixture: one loose in a bowl and the others wrapped in aluminum foil pouches. Leave a gap on top of each pouch for the smoke to escape.

Three hours later I was off to my charcoal smoker.  I hot-smoked the ribs over a water pan, adding fresh tea mix to the coals every half hour. First I tried pouring loose mix onto the coals, but it burned faster than a telemarketer in the afterlife. The packets worked great, though. Since the smoker was open anyway, I also brushed more sauce on my ribs during these little interludes. Yes, I know it adds 20-30 minutes to the cooking time whenever you pop open your smoker, but I had all day and figured the taste would be worth it.

While potpourri and tea smoke mix share some ingredients, here’s the difference—potpourri comes in a sack, Szechuan tea smoking has one.

And I was right. The sauce alone turned the ribs into salty, sweet, deliciousness with a spicy kick. The smoke was distinctly different than the wood chip variety I’ve come to know and love. It has a much more herbal kick to it than hardwood smoke. I’m definitely making this again. Hell, I may even go crazy and share it with other people next time.

Tea-Smoked Country Style Pork Ribs
This is the recipe I used for my rib experiment.  For as simple as it is, I loved it.

Mix up the rib sauce, coat the ribs, and let them soak inside the fridge for three to five hours.  Meanwhile, mix up the smoking mix and prep your smoker. Once the coals are ready, you hot-smoke the ribs until they reach an internal temperature of 165 degrees F. (this will take roughly two or three hours).  I made four packets of smoking mix and changed them every half hour while brushing more sauce onto the ribs.

Zhangcha Duck
This bad boy involves three different cooking processes, so if you’re a college kid living in a dorm or a creepy guy dwelling in Mom and Dad’s basement, chances are you don’t have the space to make this.

First you want to clean the duck and open a slit about 3 ½ inches long at the back of it so you can remove the guts. Then, mix everything but the duck and the tea. Marinate the duck in that concoction in the fridge for several hours. Place the duck into boiling water to tighten the hide. This ensures that your duck will have a crispy skin after you’re done cooking it. While that’s going on, you should start preheating enough vegetable oil or peanut oil in a separate pan to deep-fry the duck later on. Drain the water from the duck, and move it over to your heated wok. The tea sits in the bottom of the wok while you smoke the duck in it for 10-15 minutes. After that, steam the duck for 10 more minutes. Think you’re done? Not quite. Let the duck cool off, then deep-fry it in the oil until the skin is crisp. It goes great with rice, veggies, and Chinese dumplings.

Tea-Smoked Sichuan (or Szechuan) Bacon
Anything that is good for smoking pork ribs has to be worth a go for bacon. Here’s my take on what might be a cool Chinese twist on my favorite breakfast meat.

Mix up all the non-swine ingredients and use the mixture as a rub on all surfaces of the pork belly. Place it in the fridge inside a Ziploc bag or in a covered, non-reactive container just large enough to hold the pork belly. Flip the belly every day for seven days, then wash it off, and let it dry on a rack in the fridge overnight. Hot-smoke it the next day until it reaches 165 degrees F. at its thickest point. Then, remove the skin while the finished bacon is still warm.

Serves up to 8 people
Heat Scale Mild to Medium

*Note: this is not a chile pepper, nor is it related to black pepper. This from Wikipedia:
Sichuan pepper has a unique aroma and flavour that is not hot or pungent like black or white pepper, or chili peppers. Instead, it has slight lemony overtones and creates a tingly numbness in the mouth (caused by its 3% of hydroxy-alpha-sanshool) that sets the stage for hot spices. According to Harold McGee in On Food and Cooking (second edition, page 429), they are not simply pungent; “they produce a strange tingling, buzzing, numbing sensation that is something like the effect of carbonated drinks or of a mild electrical current (touching the terminals of a nine-volt battery to the tongue). Sanshools appear to act on several different kinds of nerve endings at once to induce sensitivity to touch and cold in nerves that are ordinarily nonsensitive. So theoretically, this may cause a kind of general neurological confusion.” Woot!