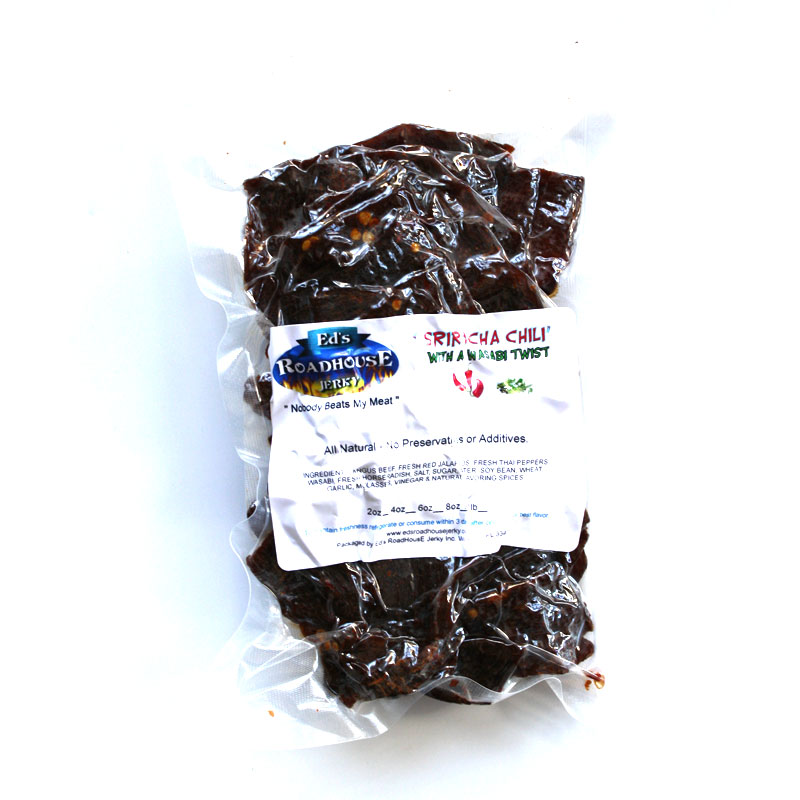 Steve Johnson has made a name for himself reviewing beef jerky at his site, Best Beef Jerky.

Sriracha flavored beef jerky is a trend quickly turning into a hot new phenomenon in the world of gourmet jerky. Over the past few decades, Sriracha sauce has slowly gained a foothold into American culture, and just as quickly, has extended itself into a wide variety of foods.

The first brand of beef jerky marinated with the famed “rooster sauce” came out a few years ago but it’s only been within the last year that several other brands have jumped on the bandwagon. Here’s a look at three of the more popular gourmet jerky brands offering Sriracha varieties… 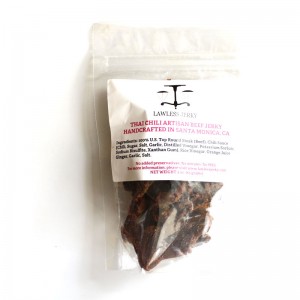 Lawless Jerky, Thai Chili: The creation of a full time attorney who moonlights as a craft jerky chef, Lawless Jerky specializes in bold new flavors mixed with soft, meaty chunks of beef. Their “Thai Chili” jerky is an homage to the famed Sriracha sauce, but bolstering it with tangy vinegar and fruity orange.
Just opening up the package one can get a woosh of the Sriracha, and mixed with the scent of marinated beef, it sends a pulse into the saliva glands, intensifying the anticipation. And once a piece of Lawless’ jerky hits the taste buds, the unmistakable flavor of sriracha sauce rings a bell in the brain, but opens the eyes and straightens the spine with the tangy, fruity flavor of vinegar and orange.
The level of heat remains at a medium level, strong enough to moisten the scalp, but never so hot to require a glass of water. 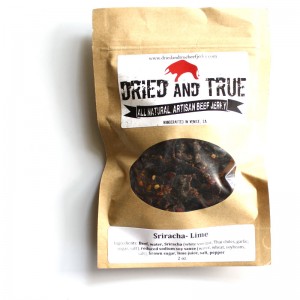 Dried and True Jerky, Sriracha Lime: Along the sunny shores of Venice Beach, CA, Dried and True Jerky has become a staple at the local farmer’s market and is now finding its way into neighborhood mom and pop shops. This Sriracha Lime jerky was made from the company’s own sriracha recipe, using red jalapeno peppers and fresh garlic,
Cut into bite sized chunks perfect for snacking, each piece packs an uppercut of flavor, smacking you first with a one-two punch of sweet and sriracha, but within seconds brings on a very tangy lime juice that sends tingles into the back of the mouth. Further into the chewing, the unmistakable flavor of beef comes in. Imagine yourself eating a grilled steak, squeezing a bottle of Sriracha over it and dousing it with fresh lime. Yeah, that’s what it’s like.
The level of heat in this remains at a medium level, enough to satisfy spicy food fanatics, but allowing you to savor the complex flavors that goes into this jerky. 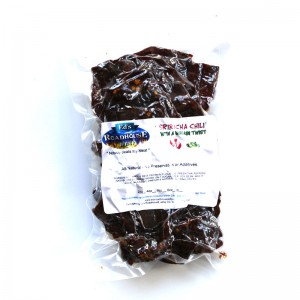 Ed’s Roadhouse Jerky, Sriracha with a Wasabi Twist: For decades, Ed’s Roadhouse Jerky has mastered the art of sweet mixed with heat and infusing it into meat. Known for producing some of the boldest, innovative jerky flavors in the world, they didn’t want to just put out a sriracha variety and walk away, they wanted to raise the bar for others to follow.
Starting with a tender, well marbleized cut of beef, and backed up with their signature sweet, savory marinade, the flavor of sriracha sauce comes on and is easily recognized for its blend of chile peppers and garlic. But going further into the chewing, the contrast of wasabi paints a light but noticeable pungent touch, imparting a more Asian character over a soy sauce marinade and a natural meat flavor reminiscent of roast tri-tip.
The level of heat in this jerky steps another notch to a medium-high burn, creating a more gratifying endorphin rush to go along with the complex flavors and steak-like chewing.

Of the three brands listed here, it’s hard to pick a favorite, but Ed’s Roadhouse, “Sriracha with a Wasabi Twist” does a very good job of providing the recognizable flavor of Sriracha against a tender, moist meat consistency, with a savory natural meat flavor. All three brands of jerky mentioned here are currently selling online as of this writing.