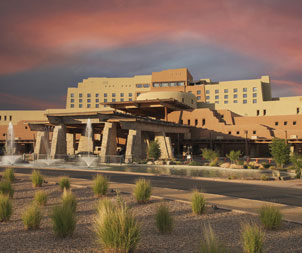 Stay at Sandia During the Show and Be Entered To Win A Night!

In a special promotion in conjunction with Sandia Resort & Casino, anyone reserving a room at Sandia using the “Fiery Foods & BBQ Show” special room rate will automatically be entered to win one night! We will be giving away five total room nights during the show!

Using the special show rate already gives you a great deal of $169/night for a one of the best hotels in the Southwest, featuring oversized guest rooms, 32-inch flat screen TVs, on-site restaurants, spas, golf course and casino PLUS the convenience of staying on-site for the National Fiery Foods & BBQ Show! Deadline to reserve is February 6.

Contest Rules: Anyone reserving under the room block will be automatically entered into the contest. Using Player’s Club cards does not qualify for the contest. Winners will be announced and notified on Friday, March 2, 2012. Sunbelt Shows, Inc. will pay for one night’s stay during the National Fiery Foods & BBQ Show including taxes and service fees. Other hotel fees will be the responsibility of the winner.

Click here for a link to Sandia Resort’s online reservation page where you can sign up for one of the rooms set aside for the Fiery Foods & BBQ Show.

For exhibitor booth and ad reservations, or for more information, give Emily a call at at 505-873-8680. I certainly hope to see you at the show, staying at Sandia Resort!