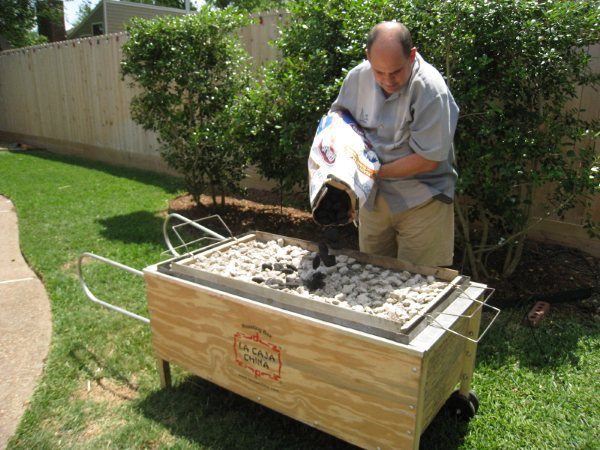 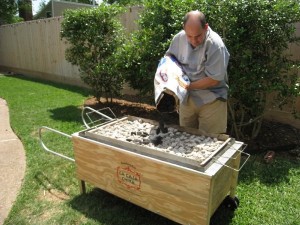 Roberto Guerra loads charcoal into the top of a La Caja China.

A pig, a Cuban, and a chef walk into a bar…sounds a bit like the beginning of a joke, but the rising popularity of La Caja China cooking is nothing to laugh at. Translated, the name simply means “The Chinese Box”, and it’s been around a long time. Basically it’s a wooden box lined with metal (either aluminum or galvanized steel). There’s a drip pan, a large metal grid to hold the meat, and a metal ash pan that covers the top of the cooker—this is where the charcoal is laid, and it’s the secret of how La Caja China allows you to roast a large cut of meat quickly, without drying it out.

Cuban-American Roberto Guerra developed the contemporary version in 1985, after his dad described seeing Chinese railroad workers roasting meat in one of these boxes during his childhood in Cuba. The La Caja China company is going strong, with several different versions of roasting boxes with varying capacities, all the way up to “whole hog” size. Roberto’s roasting box was featured on ThrowDown with Bobby Flay in 2009, and he hasn’t looked back. Watch the YouTube video:

Another name comes into the story as well, that of chef Perry Perkins, a third-generation gourmand from the Pacific Northwest, who tried a La Caja China and fell in love. He began developing recipes and writing about The Chinese Box, eventually publishing two cookbooks: La Caja China Cooking—The Secret to Perfect Roasting and La Caja China World—Roasting Box Recipes from Around the Globe. Some recipes call for preparing the charcoal fire above the meat (when roasting a whole pig, for example), while other recipes have you cooking over the charcoal bed. Talk about a versatile grill! 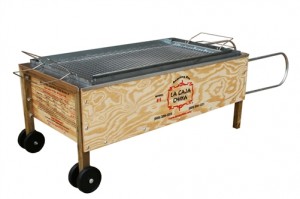 In spite of its name, the simple, oh-so-clever Chinese Box hails from Cuba.

Not content to rest on his pork-roasting laurels, Perry also has a website/blog called hautemealz.com, which is a membership-based recipe service that provides weekly menus for home chefs to create delicious, healthy meals. I downloaded their sample menu and the recipes look darn tasty and not difficult to create, plus they come with handy shopping guides, nutritional analysis, etc. I’ll post about this again after I’ve taken the recipes for a spin.

Here are a few recipes from Perry’s book La Caja China World. I love the way this book is divided by country, with dishes ranging from Argentinian Grilled Tri-Tip & Chimichurri, to pure exotica, like Whole Roast Springbok with Apple Jelly from Zimbabwe. Though the recipes have instructions for cooking in a La Caja China, you could make most of them on a conventional grill (except the whole pigs, of course). The book isn’t just about meat, however. There are interesting sides and sauces as well, and some very handy info in the appendix (including servings per pound, wood smoking guidelines, wine & BBQ pairings). But to get the real effect of Perry’s international recipes, you need the Chinese Box!

Pierna Criolla a Lo Caja China
(stuffed Cuban pork shoulder, recipe by Roberto Guerra)
This is the infamous recipe that Roberto used to defeat celebrity grillmaster Bobby Flay in their Miami Florida ThrowDown! With the possible exception of whole roast pig, this is the best thing I cook in my La Caja China.


Remove bone and flatten meat so that it may be rolled.

If the pork shoulder is very fatty, a small amount may be removed. Score fat well and marinate for a minimum of 12 hours in the Mojo and Adobo.

Lay meat in roasting tray, on the rack (fatty side down) and line with ham slices, bacon slices, prunes and guava shells. Roll meat carefully to keep the filling inside the roll. Tie firmly with a butcher cord.

Cover with brown sugar and 1/2 bottle of Malta. Place tray with meat inside the box, cover box with the ash pan, and add 5 lbs. of charcoal and light up. Once lit (20-25 minutes) spread the charcoal evenly over the tray.

Allow to rest at room temp, 20-30 minutes before slicing. Serve with congri and fresh baked bread.

Editor’s note: Guava shells can be found canned in heavy syrup, but you want to use fresh shells for this recipe. If you’re lucky to live near a large city, guavas can be found in some grocery stores and international markets.

Although it may be an exaggeration to say the whole country is made up of gourmets, it’s true that Croatians place a high priority on fresh, correctly prepared food. These hamburgers are popular in one form or another throughout the Balkans. The name for these meat patties comes from the word pljesak, meaning “to clap the hands,” after the motion used to form these thin, large burgers.

Very finely mince garlic and onion and gently fold them into the meat.

Season with salt, pepper, and paprika. Add water. Mix gently by hand and let it stay in refrigerator for 2-3 hours.

Lightly oil La Caja China grill, and lay on meat above a solid bed of hot coals (you can hold your hand at grill level only 1 to 2 seconds).

Grill 2-3 minutes per side, until just medium rare. Remove from heat and allow to rest on a rack 3-5 minutes.

Cut the cheese into medium-sized dice and dice the ham.

In a bowl, combine the cheese, ham, and cucumber then stir in the garlic and walnuts.

Stir well to combine then mix in the sour cream and mayonnaise.

Turn into a salad bowl, garnish with fresh herbs and serve.