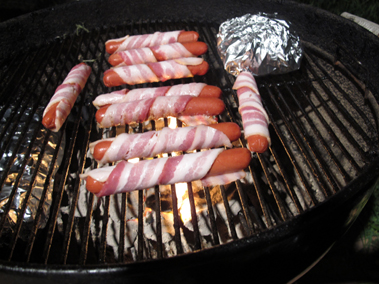 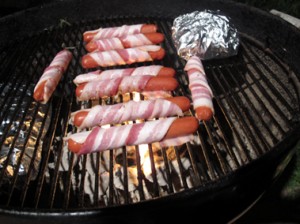 As much as I like the Laker games at Staples Center here in Los Angeles, I hate giving in to the extortion that passes for pricing when it comes to concession food. I don’t have to go far to find a good value, though. The sports arena is surrounded by street vendors grilling bacon-wrapped hot dogs and hawking them for two bucks apiece. Forced to choose between the ten dollar “value” meal at the McDonald’s inside or five bacon wrapped hot dogs outside, I’ll give you three guesses who gets my business. Hint: it isn’t the big company with the spooky clown mascot. 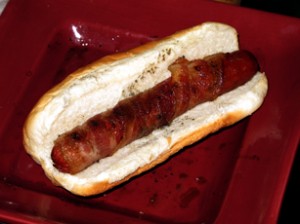 Candy caning dogs in swine is by no means a Los Angeles thing. The New York Times ran this great article on Mexico’s part in their origin story but I’m never one to leave well enough alone, so I changed it up a bit. Anything you can do with a hot dog is generally as good if not better when executed using Italian sausage, chorizo, or brats instead, no?

Most store-bought hot dogs are pre-cooked and all you’re really doing on the grill is heating them up and turning them until they have the appropriate amount of char on them. When you swath them in bacon clothing, you’re main concern is making sure the bacon is properly cooked without burning the hell out of the dog in the process. That, and making sure the bacon doesn’t unravel from the hot dog whenever you move or turn it. I like to use a little olive oil along the slice of bacon as a glue to keep the two together. Not only does it work well, olive oil gives the concoction a nice flavor to boot. Eating them is another matter.

Mix the mayo, Tabasco®, and lemon juice and use a funnel to put the mayo blend in a squeeze bottle. Wrap the wieners with the bacon slices so the sausage is completely covered. Cook the wieners on a comal or flat top, rolling them over until the bacon is crunchy on all sides, about 7 minutes. Cut a pocket into the buns to form a “boat” and toast them on the grill. When the wieners are cooked, divide the beans and avocado among the four rolls, spooning them inside the pocket and spreading on either side. Spread the cheese down the middle. Using tongs put one piping-hot bacon-wrapped wiener into the pocket of each roll. Top each wiener with onions and tomatoes. Spread the Salsa Verde across the top. Apply the mayo blend in squiggles across the top of the hot dog.

For the refried beans: melt the lard in a large skillet over medium-high heat. Allow it to heat for another minute, then add the beans and mash them for 2 minutes with a fork or potato masher. Stir in the 1/2 teaspoon of salt (or to taste). Add the bean broth and the pepper and continue mashing until the beans reach the desired consistency. Tex-Mex beans are generally chunky rather than soupy.

For the Salsa Verde: put the cleaned tomatillos in a saucepan and cover with water. Bring to a boil, then turn off the heat and allow the tomatillos to soak for 5 minutes. Remove from the heat, drain, and purée the tomatillos in a food processor. Add the cilantro, serranos, onion, garlic, sugar, and lime juice to the food processor and pulse three or four times to combine. Season with salt to taste.
Serves: 4
Heat Scale: Mild

Make sure you wear gloves while chopping the pepper. Mix it in a small bowl with the garlic, a light drizzle of olive oil, the salt, pepper, and cumin. Next, make an aluminum foil packet, scoop the mixture into it, and fold it shut to seal it.

Fire up the grill. While it’s heating, sauté the onion and green bell pepper in a little olive oil with a little salt and pepper until the onion slices are clear and the bell pepper has changed to a more olive green in color. Turn off the heat but put a cover over the pan to keep the veggies warm.

When the grill reaches a medium-high heat, place the brats and the foil packet on it. Turn the sausages every 3 minutes until they’re almost done (they shouldn’t droop when you lift them with your tongs). You’ll also want to flip the packet after five minutes and let it grill during the next step. Take them off the grill for about five minutes. During that time, brush a little olive oil on one side of each bacon slice. Then, wrap each brat with a slice, corkscrew style, and place it back on the grill. Move the foil packet off to the side or remove it from the grill completely when you put the bratwursts back on the grill. Turn the sausages as before until the bacon is done. Grill the rolls at the same time, if desired.
Once the bacon is sufficiently grilled, remove everything from the grill. Make a bed of the vegetables in each roll, set a brat on it, garnish it with the relish, and add the condiments of your choice.