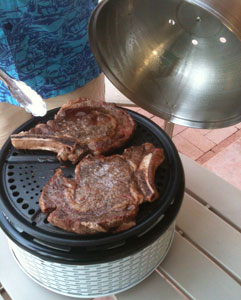 One day while prowling the Web, I ran across something called a Cobb Grill. Curious, I explored their website at www.cobbglobal.com. After reading about this nifty cooker from South Africa, I absolutely had to try one out for myself. I’m glad I did! 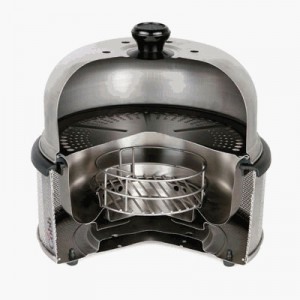 The Cobb Grill in cross-section.

Think of the Cobb as a cooking system, because you can use accessories to expand its functionality, similar to the add-ons for a Big Green Egg (but for a fraction of the price). Unlike typical barbecue grills, the Cobb can roast, bake, smoke, fry , boil and barbecue, according to their site.  It was originally designed as a safe cooking alternative for people in rural Africa, with corn cobs as the heat source (hence the name). From there it evolved into a slick, sophisticated and incredibly versatile charcoal grill…I almost hesitate to use the word, because it’s so much more than just a grill. But since I only experimented with the grilling aspect of my Cobb, I’ll stick with that. 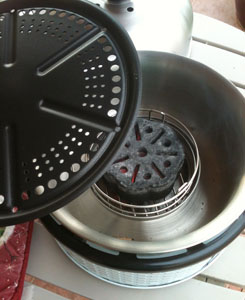 The Cobb holds one large charcoal brique or 6-10 briquettes.

I guess before we get into the details, I should describe how the Cobb is put together. There’s an outer coated-steel shell that stays cool during cooking, so you can move it around as needed (talk about the perfect tailgating or boating grill). The shell holds an inner stainless steel sleeve that holds the charcoal and catches drippings. On top of that sits a Teflon-coated grill grid with holes that channel the juices to the edge of the ring, where they don’t contact the charcoal. This makes for a very clean, low-smoke process, but cuts down a bit on the true “charcoal-grilled” flavor and the meat tastes more like what comes off a gas grill. Fortunately, adding some wood chips during cooking puts that great smoked flavor right back where it belongs—on the meat. The whole shebang is covered by a stainless steel dome lid, and it all weighs just 8 1/2 pounds. Oh, and there’s a zippered custom carrying bag to boot.

My first experiment involved a couple of steaks and a Lokkii charcoal brique, which is designed to fit perfectly into the Cobb’s cooking chamber (more on this later). Six to ten conventional charcoal briquettes work just fine, but no lighter fluid should be used in a Cobb.

We fired up the Cobb and put the steaks on about 15 minutes after lighting the Lokkii brique (according to their instructions). We should have left it for a half hour, as recommended in the Cobb manual (first lesson learned). Anyway, 2.8 pounds of 1-inch-thick steak was cooked to medium in a little less than an hour and a half. I think it would have been faster if we’d let the Lokkii brique burn longer beforehand.

Steaks on the Cobb turn out very moist.

The steaks were very good. Because the Cobb grill doesn’t get extremely hot, it’s a gentle kind of grilling experience—both for the meat and the chef. The steak was plenty moist and very evenly cooked. There are no flare-ups with a Cobb. We missed some of the char flavor that comes from fat dripping on charcoal, so when I cooked up a rack of pork spare ribs next, I made sure to put some soaked applewood chips on top of the charcoal during cooking.

And that, my friends, turned out to be the secret to grilling meat on the Cobb. I coated the rack of ribs with Montreal steak rub after cutting it into 3 pieces (so it would fit on the circular 12″-diameter cooking surface). The applewood chips gave just the right amount of smoky flavor to the meat, and added a sweetness to the ribs that had all of us saying, “wow”. Honestly, they were the best ribs I’d ever had from a home grill, hands down. They were ready in a shade over an hour, and were moist and evenly cooked. 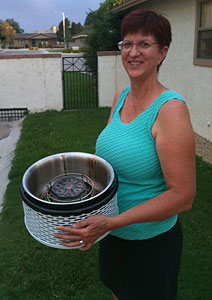 The outer surface stayed cool, even after cooking the steaks for an hour.

The Lokkii brique was another revelation. This company has a line of briquettes, briques, and other products that are organic and contain no petroleum-based accelerants, which surprised me because of how easy the brique was to light. And once lit, the fire spread quickly across the entire surface of the charcoal, which made me curious as to what the secret ingredient might be. The answer? Coal! There’s a smidgen of anthracite coal mixed into the brique to get it started. And the Lokkii briques I used had tons of cooking energy leftover long after I finished my hour of cooking. So you could do a much larger piece of meat, or cook a second round of grilled veggies as well as the meat. S’mores comes to mind…yum. Anyway, you can find Lokkii charcoal products for sale online. A package of four briques for the Cobb runs about $12.

The next day, I just picked up the Cobb, tossed out the ash (which maintained its shape and didn’t fall apart into a messy pile inside the grill), and washed out the stainless cooking sleeve. The grill grid went into the dishwasher, and the entire grill ended up almost as clean as when I pulled it out of the box. How many other grills can you do that with? We joked around that this was a “chick grill” because it’s so cute and easy to use. Or maybe it’s a “metrosexual” grill because it’s not really going to satisfy a manly man’s need for flames and smoke and drama. But when you get down to it, this is a universal grill—small enough to carry in your car for camping, safe enough to use on your boat or your apartment patio, and easy enough to be a completely non-intimidating introduction for a novice outdoor griller. And the price of around $100 (for the basic model), makes this an excellent choice for just about anybody.

Time Magazine named it one of the best inventions of 2001, and I agree (I’m sure the editors over at Time are breathing sighs of relief about that). Now I need the accessories so I can bake, stir-fry, and roast. I may abandon my kitchen stove forever. You can watch a video demonstration about cooking with a Cobb grill: