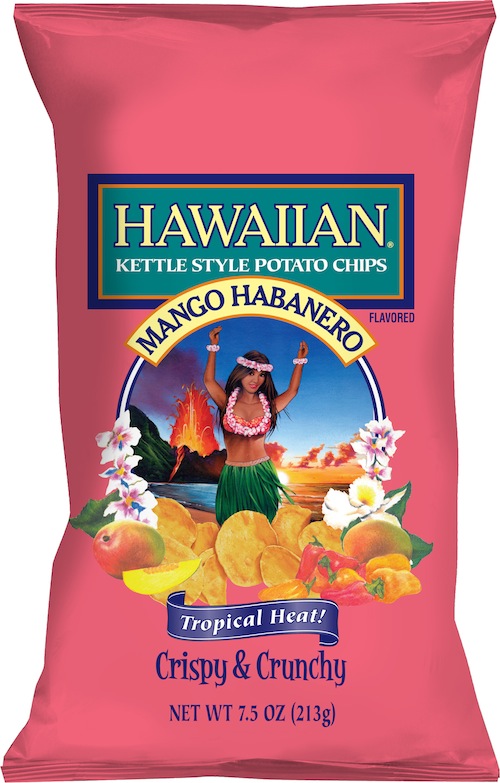 The true origin of the potato chip is lost in the murky depths of culinary history, but I’ll put my money on the Brits as being the first to slice potatoes paper-thin and toss them into hot oil. A popular urban legend identifies a Native American chef named George Crum as the first American to serve potato chips to a restaurant customer at a resort in Sarasota Springs, New York. The year was 1853. That story may or may not be true; however, it’s definitely true that potato chips in their many manifestations have become America’s most popular snack, with revenues well over $6 billion per year.

Remember when potato chips were greasy, thin salt bombs with more crunch than flavor? Remember when ridges were considered to be an exciting chip innovation? The potato chip has definitely come into its own, with a myriad of flavor and shape variations, including sweet potato, those curious hyperbolic paraboloids known as Pringles, and kettle cooked chips. Supposedly this last type of chip has artisanal aspirations, since the word “kettle” conjures up a more intimate, home-made image than does the word “vat”. According to manufacturers, kettle chips are cooked in smaller batches, rather than with the continuous-flow manufacturing system used for regular potato chips. However, when you’re talking about making millions of anything, you’ve pretty much left the artisanal world behind.

I decided to taste a few of the spicy kettle chips currently on the market. I had to narrow it that tightly, because there are so many spicy, chip-like substances on the market, I’d be tasting products from now until next Christmas. Since I don’t relish the idea of weighing 300 pounds, I settled on kettle chips. I tried chips by five different companies: Cape Cod, Hawaiian, Kettle, Lay’s, and Blair’s. I’ll describe my favorites first, though I tasted them from mildest to hottest. My least favorite chips also happened to be the mildest, which is partially coincidental. 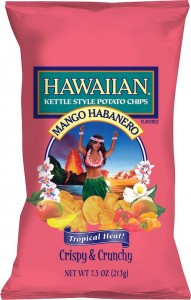 Hawaiian Style Mango Habanero chips: the first thing I noticed was the lack of intense saltiness—refreshing in a chip. The mango flavor is definitely there, but the chips are not intensely sweet like some barbecue chips. A lovely glow of subtle heat followed the savory sweetness of the first bite. As a lover of mango, I wouldn’t have minded even more of that aromatic fruitiness, but overall the chips are excellent and well-balanced. These new-to-the-market chips are definitely worth hunting down and ordering online! Hot Sauce Daily reviewed these chips and said they had “kick ass heat.” Not sure I’d go that far, but they are really good.

With no little trepidation, I moved on to Blair’s Death Rain Cauldron Cooked potato chips. That’s right, no cutesy kettle for Blair. Taking his cue from witches everywhere, only a cauldron would do. I started with Jalapeño Cheddar, which was rated as Medium Hot on the bag’s thermometer graphic. Flavors of onion powder and cheddar cheese powder swept by, followed by a little heat. Medium-low is where I would rate these chips. They were ok but tasted a bit too much of fake cheese.

Next were Blair’s Buffalo Wing chips, which I wanted to try because I was curious to see how they would translate the flavor of a buffalo wing into a chip. I can’t really say tasting these chips conjured up the flavor of a buffalo wing in my mouth, but I enjoyed the tangy, smoky aspect of these chips. Maybe if I dipped them into bleu cheese dressing. They were also rated “medium” on the bag, and they were more solidly on that rating to my mouth. Blair’s Chipotle chips were smoky good and low on the salt, but I didn’t think the heat ranked as medium. 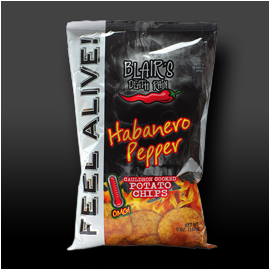 After taking a break with some milk, I wrapped my tastebuds around Blair’s Death Rain Habanero chips, the ones in the black bag with “XXX HOT” and “OMG” on the bag. Yikes. Since I know superhot stuff will send me running for the ice cream at the Fiery Foods & BBQ Show, I feared for my palate. But since I took on this project, I soldiered on. I sniffed the open bag—the smell didn’t burn my nose, which I took as a good sign. Still, I could definitely smell the pungent bite of chile in there. The first couple of chips were nice—I could taste some chile, smoke, and good spices. After a few more, the habanero heat began to build up and my nose started to run. I was very glad to have a cup of milk to sip on. If you’re a chilehead with any tolerance for habanero, you’re going to love these.

Cape Cod Sweet & Spicy Jalapeño chips are definitely on the lower end of heat…in fact, I’d use the word “lukewarm” to describe them. The flavor is nice, but nothing earth-shattering. Mostly I tasted the flavor of onion powder, with no real essence of jalapeño.

Lay’s Kettle Cooked Jalapeño chips were a disappointment. They were flat-tasting, with no dimension to the seasoning. Sure, they were a little spicy, but there was nothing for my tastebuds to identify with. It’s exactly what I’d expect from a ginormous mega-manufacturer trying to ape a small-batch concept.

Kettle Brand Spicy Thai chips: I had high hopes for these chips. From the fiery red bag, to the word “Thai” on the label, I pictured all the spicy, fruity nuances of my favorite food lovingly wrapped around a kettle chip. I sniffed the open bag, expecting perhaps a whiff of red curry, lemongrass, cilantro, or coconut—nope. What a letdown. These chips have as much resemblance to Thai food as does a Big Mac. I wanted my money back. And it was really surprising, because I like many of the other Kettle Brand flavors.

My personal favorite was the Hawaiian Mango Habanero, because of the novel, complex flavor combined with a comfortable level of heat. Hardcore chileheads will probably find them to be too mild—and for them I recommend Blair’s Habanero chips. I don’t think any of the chips I sampled captured the fruity, fiery aspect of a good Caribbean habanero pepper sauce. Maybe it’s too much to ask. If you think you have found the perfect spicy chip, please let me know your favorite!