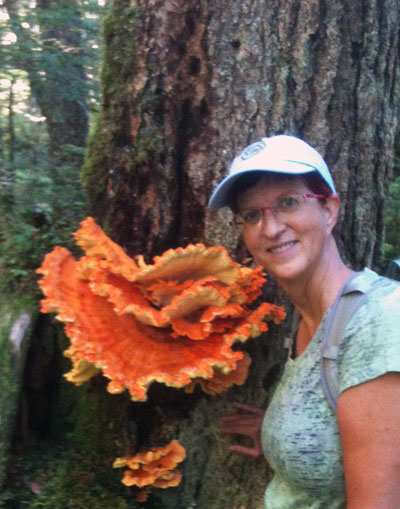 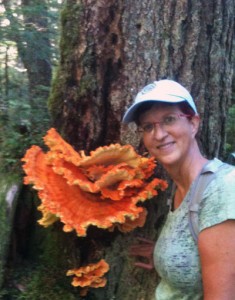 Me with the distinctive Chicken of the Woods.

I recently had the pleasure of spending a few days wandering the forest around Juneau, Alaska. It being late summer, I was surrounded by wild blueberries ripe for the picking, along with cloudberries, salmonberries, and other berries too numerous to list here. What I didn’t anticipate was the special treat of wild mushroom gathering. Late August is the time of year when the day-glo orange-and-yellow fungus called Chicken of the Woods crops up on the dead and dying trees in the deep woods.

Chicken of the Woods is scientifically classified as Laetiporus sulphureus. This mushroom is also known as chicken fungus and sulphur shelf, as it resembles the meaty texture of chicken and grows in shelf-like brackets on the wounds of trees—commonly on oak, fir, cherry and willow. It is found in many parts of the world and is considered to be a fine edible mushroom that is difficult to mis-identify due to its distinctive form and color. That being said, before I ate any of the mushrooms I collected, I contacted my pal Jamie (who has a degree in botany and lived in Juneau) just to make sure I had the real McCoy and that it wouldn’t make me ill.

Not only did Chicken of the Woods not make me ill, it was absolutely delicious! I read that there are some people who can have allergic reactions to this (or any) mushroom, and that sometimes it can absorb unsavory substances from the tree it inhabits (particularly eucalyptus and other pungent trees). So here is my OFFICIAL DISCLAIMER: I do not recommend the collecting or consumption of any wild mushroom unless you are with an experienced person who knows it is safe, and then only eat a tiny amount at first, to make sure you are not allergic. I’m a pretty adventurous person, and I trust my botanist friend about things mycological, so I took the chance and was not sorry. There are many online sources for edible mushrooms if you don’t want to be a risk-taker—and many good guidebooks for identification if you want to try picking them yourself. The best way to learn, however, is to go out with a seasoned collector who knows the local varieties and how to collect them safely. 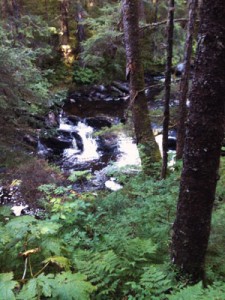 As anyone who has attempted to travel off-trail in rainforest knows, it can be challenging. No, make that horrifying. Water droplets covering the dense undergrowth soaked my pants through immediately, and the ever-present humidity fogged my glasses. A thick carpet of spongy green moss on the ground hid ankle-twisting depressions and snags, and the Devil’s Club—a particularly nasty and common plant in these parts—succeeded in prickling my hands with its many fine spines. To reach the glowing beacon of orange brackets blazing from a fir tree trunk about 75 feet off the trail, I managed to clamber onto a large fallen log and crawl on my hands and knees up it to the mushroom. I’m glad there was nobody with a video camera around, as I had to keep up a running verbal stream of nonsense commentary to scare off any bears that might have been watching. It was an extremely undignified maneuver, but it worked.

The stack of bright yellow-orange plates was very beautiful, and harvesting was simple—a slight downward pressure caused the bracket to pop away from the trunk, and I tucked several into a tote bag. I collected about 12 pounds from that spot, and there was still a large amount of fungus left on the tree when I was done. Chicken of the Woods is quite dense, so I determined that one tote bag full was enough to have to haul back down the fallen log to the trail. Crab-walking feet first down a fallen log while balancing a bag full of mushrooms is something I’ll never forget.

Wet to the bone, chilled, and elated, I hiked back down the boggy trail to my vehicle and headed back home with my quarry. I showed the satchel of golden treasure to my daughter Kelli, who rolled her eyes and asked, “so what are you going to do with all that?” It was a fair question, as I was just visiting and had to fly out in 2 days. After a quick shower to warm up, I jumped into cleaning and prepping the mushrooms for dehydrating. 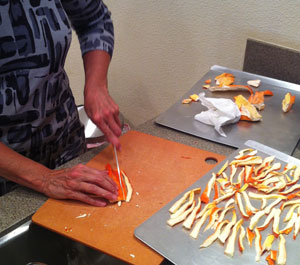 Because they were so fresh, the brackets required only minimal trimming and washing. I patted them dry, sliced them thinly and laid the slices out on a cookie sheet. I set the oven on the lowest setting and put the try in, keeping the door slightly ajar so the mushrooms would dry rather than bake. I knew they were ready when the slices snapped crisply, indicating all the moisture was out of them. A few hours later, I had dried wild gourmet mushrooms and a hell of a story.

There’s a good page on Wikipedia about Chicken of the Woods here.

Here’s a video that shows the growth habit of both Chicken of the Woods and Hen of the Woods fungus in New England. It’s a lot easier to harvest mushrooms there than in Alaska! There seems to be something about wild mushrooms that brings out a level of angst in people that’s over the top. This poor guy was called all kinds of names just because he posted a video about these mushrooms he found growing in the woods. Yes, eating the wrong mushroom can kill you. So can walking past a pit bull or riding on an airplane. Get over it. 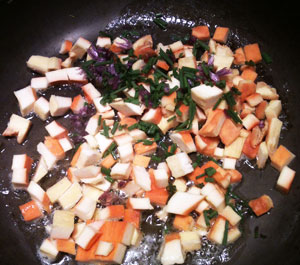 Mushrooms and chives in the butter.

Of course, I also ate some Chicken of the Woods fresh. Here is my recipe for incorporating it into scrambled eggs. This particular fungus is not commonly available for sale, but any fresh gourmet mushroom may be substituted. Alternately, you can get Hen of the Woods (Maitake), which is a completely different mushroom in spite of the name resemblance. Its flavor is similar.

Spicy Chicken of the Woods Scrambled Eggs
The earthy flavor of the mushrooms blended wonderfully with the goat cheese, and adding the bright fruity notes of habanero pepper enhanced these simple, delicious eggs. 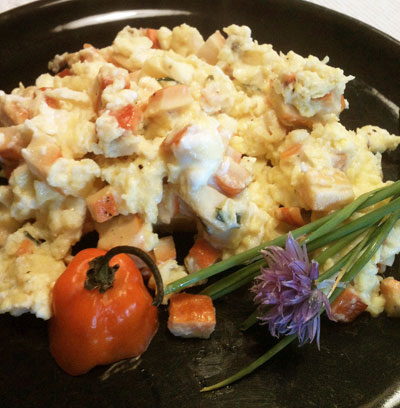 Melt butter in a pan over medium heat and sauté the diced mushrooms until they begin to soften slightly. Add the chives and habanero and cook for another minute, then pour in the eggs.

Scramble the mixture together, and when the eggs are almost set, add the chevre, salt and pepper, and mix into the eggs. Remove from heat and serve immediately.