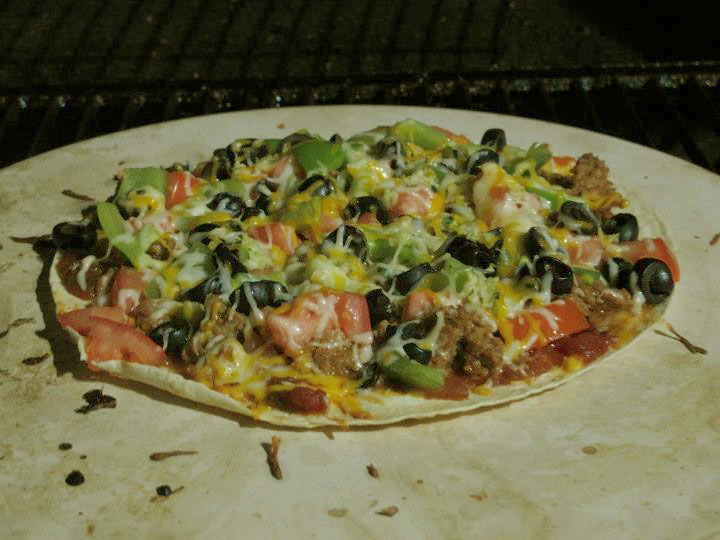 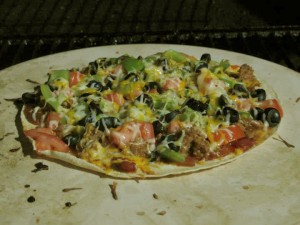 Two weeks ago, my niece Jordan ordered me to grind up a batch of my habanero chorizo for the family’s Saturday grill night. What she did not dictate was how I cooked it for the group. Some of you may remember how much I love playing with grilling pizza. I combined the two dishes in this simple little twist on pizza and quesadillas. The only person who ended up hating it was me because it was all gone before I had a chance to fill up on the stuff.

Habanero Chorizo Pizza
1 lb crumbled and cooked chorizo (see my home version here)
2 habanero peppers
1 large jalapeno pepper or two smallish ones
4 cloves of minced garlic
1 12 or 16 ounce jar of salsa
4 cups grated four-cheese Mexican cheese blend
1 large chopped green bell pepper
1 large chopped tomato
4 large flour tortillas
1 quarter cup of fresh, finely chopped cilantro
First, heat the grill to 300 degrees. Put the chopped bell pepper on foil, set it on the grate, close the lid, and let it cook in the foil for 15-20 minutes. If you haven’t pre-cooked the chorizo, you should likewise throw it in foil on the grill. It may take longer than the peppers. I put mine on the top rack first then move them to the bottom in the last five minutes to put a little char on both ingredients. If you’re using charcoal, I recommend having a small batch of coals in heating in the chimney starter while the sausage and peppers are cooking because you’ll be cranking up the heat later.
While that’s going on, mince up the garlic, jalapeno, and habanero. I keep the seeds because I like these pizzas to have a nice kick. Either mix the three items up in a small bowl, or just mince them together.
Lay out four of the tortillas and pour an equal amount of salsa in the middle of each one. Use a spoon or a brush to spread it out evenly over the surface of each tortilla as if it were marinara on a pizza crust.
Once the sausage and peppers are done, pull them and set them aside to cool for 5-10 minutes. During that time, add the second batch of coals from the chimney starter or crank up the propane on your gas grill. You want 400-450 degrees F of heat for finishing the pizzas. The rule-of-thumb for baking fresh pizza is usually 600 degrees F but we’re working with a tortilla which is a lot more svelte than a full-on pizza crust. If you’re using a pizza stone, you’ll want to put it on the grill at this point to get it nice and hot.
While the grill is heats up, sprinkle the sausage evenly over the tortillas by hand, then do the same with the bells, garlic/hot pepper mixture, cheese, and cilantro, in that order. After the grill reaches the right temperature, transfer the pizzas to the grill, using either the grate or a heated pizza stone. You want them over direct heat. Shut the lid, wait 6-8 minutes, and check on them. If the cheese has melted, you’re good to go. If not, shut it again and wait another 5 minutes for the cheese to melt. Afterward, pull them onto a cutting board, wait a couple of minutes, then cut the pizza into slices and watch it disappear.
Heat scale: Mild to wild depending on the salsa you use. My pizzas are medium with a heat that builds.
Serves: 4-6 lucky people
Note: Lazy hooligan that I am, I’ve found the Chef’n Garlic Zoom does a great job of shredding and mixing hot peppers and garlic at the same time: 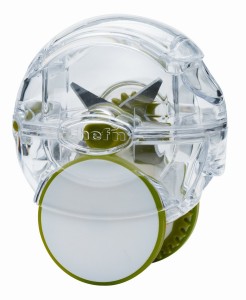 Also comes in extra large for disposing of pesky enemies for all you super villain types.