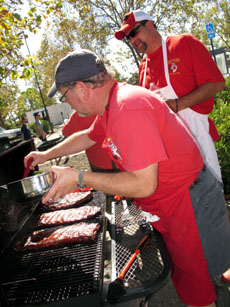 Jonathan Knopf and Doug Keiles laying on the magic.

This is Part 2 of Mark Masker’s story about Meatopia and Oakland’s Eat Real Festival. You can read part 1 here.

“You can buy the whole seat but you’ll only need the eeeeedge!” Dubbing last Saturday’s Meatopia Bare Bones barbecue competition a “brawl” couldn’t be further from the truth. The event was actually very laid back. It’s just hard for me not to feel a little primal when someone slow cooks dead animal over charcoal and wood.

The Bare Bones setup was exactly that. Ten teams each brought their own knives, seasonings, basic supplies, and sauces to Oakland’s Eat Real Festival for the competition. Nothing more, nothing less. Everything else—from the Char-Broil grills and Kingsford briquets to the meat—was provided for the teams. A lot of competition standards were forbidden. Injection and brining were strict no-no’s, as was foil-wrapping your meat. And don’t even think about busting out your Bluetooth thermometer and iPhone temperature app, tech boy. Meatopia boss Josh Ozersky created this gimmick-free contest to shift the focus from parlor tricks to sheer skill on the part of the pit masters, and he succeeded. 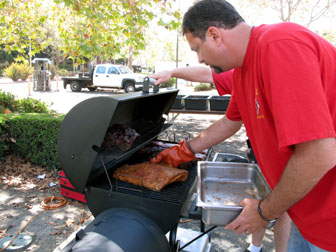 Doug Keiles laying on the slab.

Competition took place in three categories—pork ribs, beef ribs, and bone-in lamb ribs. Friday night my job was helper monkey and embedded journalist to Doug Keiles and Jonathan Knopf of Ribs Within. Today would be more of that, only with a far different emphasis for all of us. For them, focus shifted from creating a spectacular Meatopia dinner on Friday to winning a barbecue competition today against the likes of Chris Lilly (who was barbecuing right next to us). For me, there would be no more cutting bok choy. My job was to assist where needed, absorb knowledge like a sponge, and, most importantly, stay out of the way of the well-oiled machine that is Ribs Within on competition day.

The teams received their ribs early in the morning and got straight to work. Once the initial rush of firing up the grills, prepping the ribs, and getting the beef and pork versions under the lid for some serious smoking had taken place, we shifted gears to more of a waiting game. The next several hours reminded me of an old war movie where a ship captain is hunting a submarine. Only instead of pinging radar every so often, you add new hot coals or season the meat. This period of time is also the best for asking pit masters questions.

Doug and Jonathan had plenty of Ribs Within’s signature rubs and hot salt but they needed some apple juice. You’d think that with a couple of dozen food trucks in the area, one of them would have some. You’d think. Even the cocktail bar was out. The closest place anyone could think of was a minimart almost two miles away.

Well, anyone but me. If you read part one of this story on the Super Site, you know I got to Jack London Square early the day before. Mostly this was so I could get some event photos before rolling up my sleeves and pitching in for the Meatopia dinner. One side effect was that I had a pretty good idea of where things were, like the hot dog vendor who also had a nice variety of juices for sale at his stand, roughly a half a mile away. I set down my camera, zig-zagged my way through the slow-moving multitudes to the other end of the square…and no hot dog vendor. It was a Saturday, after all. 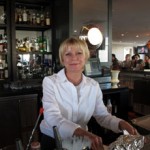 Catherine: My lifesaver at Miss Pearl’s. Thanks for the apple juice!

However, there was Miss Pearl’s right next door. It’s a bar and restaurant in a local hotel lobby. I dashed in, went to the bar, and ordered two large apple juices without the ice. I love it when a bartender looks at me like I’m high on crack, and this instance was no exception. “I’m with one of the competition barbecue teams,” I said. “We need juice for the ribs.”

Her face lit up a bit at that. In one brief explanation I’d gone from stranger with a weird order to a fellow food worker in need. “I was wondering why you needed that. I’ll tell the chef. Come back if you need more.” She didn’t charge me for the juice but if there was any way I could get her some gift `cue after the competition, I would make it so. 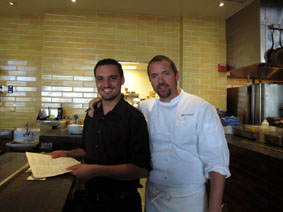 As did Bocanova chef and ketchup go-to guy Jon Ledbetter.

Zipping my way through the throng like an overgrown Ferris Bueller, I got back, handed over the juice, and a short time later, Doug sent me on a new quest. “I’ve got a mission for you. We absolutely need ketchup. Normal stuff like you’d find in a bottle. Hit the trucks and get us a small cup.”

I took off again. Surely the burger and hot dog truck would have ketchup. I aimed my bee line for it and I was right. And wrong. Yes, they had the stuff, no it wasn’t normal. Northern California cuisine is known for many things. Embracing sweetened supermarket products isn’t one of them. The truck’s ketchup was a really wonderful-tasting organic farm-to-truck offering. It was not, however, the flavor we needed.

None of the trucks had ketchup. In the end, I waded to another local restaurant in the square, Bocanova. Again, the person I talked to looked at me like I was crazy. Again, they were very helpful once I explained why I needed it. 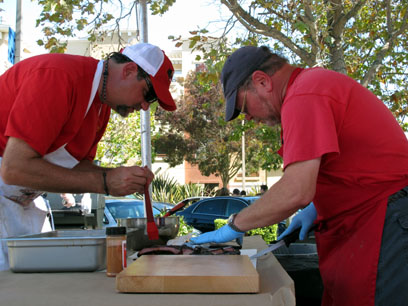 The trip back was shorter than the apple juice run and the guys wasted no time integrating the ketchup into the mix. During all of this I noted both Jonathan and Chris Lilly heating liquids in metal pans atop their offset smoker boxes. Jonathan informed me that you don’t want cold sauce affecting the temperature of the meat while it is cooking. That may not be news to some of you, but to a competition newbie like me, it was. This was just one of the lessons I picked up in a day of assisting a dedicated national barbecue team doing what it does best.
Another tip was this. Do not talk to the team when you see them cutting meat and plating it for presentation. I already knew that, but apparently a lot of people didn’t. About 15 minutes before turn in, Doug and Jonathan shifted gears yet again. Ribs came out, rested for a few minutes, and then the last stage kicked off in a flurry of examination, cutting, and final seasoning. 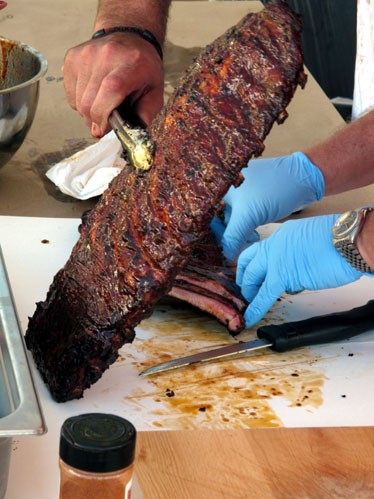 Each entry came off about fifteen minutes before it went next door to the judges’ table where Ben Lobenstein accepted it and handed it off to the judges for their consideration.

The pace calmed considerably once all the entries were in. Following a shot of tequila for all parties involved (including our neighbor Chris Lilly), people killed time cleaning up after themselves before walking over to the main stage for Josh Ozersky and Ben Lobenstein to render judgment. Chris Lilly captured Grand Champion honors and two of the three first place rib awards. My team Ribs Within took 5th place in all categories, placing us in the center of the field of ten. 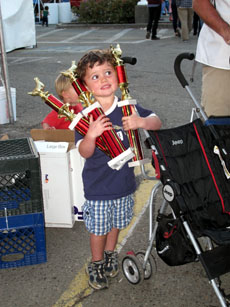 Not the actual Chris Lilly.

Doug and Jonathan were in good spirits as we walked back to the tent. The entire weekend was a great chance for them to come out to the West Coast and create some truly wonderful food in the California sun with the Pacific Ocean roughly a hundred feet away. In talking with them about the event, they said they’d learned the flavor profile was different from what they’re used to back east. For myself, I learned a lot of little things I need to apply to my barbecue style as soon as possible. 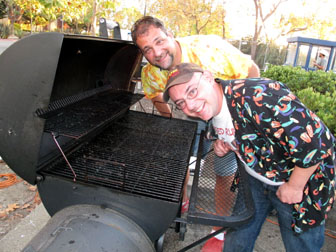 Doug and Mark celebrate the end of a busy day. 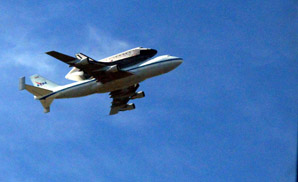 Speaking of which, I had very little time to raid the rib stash if I was going to hook up the people who’d helped us before clean up saw the food disappearing. With Doug and Jonathan’s blessing I cobbled together two “thank you” batches and ran off.

Editor’s note: You can see more from the show on the Burn! and Fiery Foods Facebook pages. If you read part one of this story on the Super Site, you know I was bummed about missing the shuttle landing in Los Angeles. Ten minutes after my flight landed in Oakland, though, the shuttle executed a flyby at the Oakland International Airport. Thus, I shot photos of it about two hours before it landed at LAX. Take that, Los Angeles.