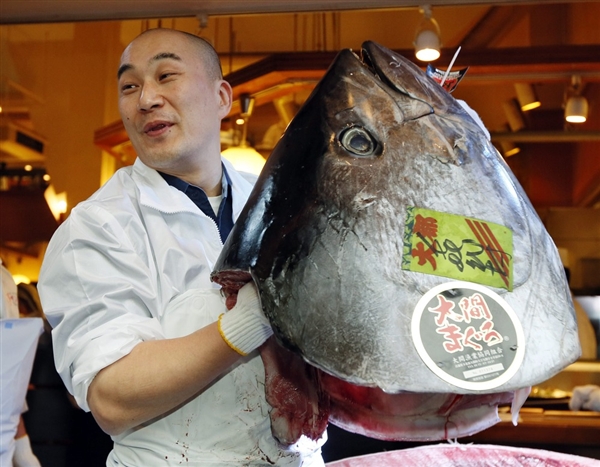 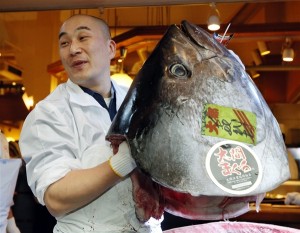 And with a payday like this, he’ll be able to afford it. The anonymous tuna slayer who captured this 489 pound bluefin tuna got a huge buyout to go with it. How big, you ask? Try a record 155.4 million yen at auction at Tokyo’sTsukiji fish market. That’s $1.76 million, to you and me.
That’s not a typo, folks. Kiyoshi Kimura, president of Kiyomura Co., which operates the Sushi-Zanmai restaurant chain, was the winning bidder who shelled out $3603 per pound for one fish. Considering a can of Starkist goes for two bucks at your local grocery store, it’s really tempting to question his ability to lead a large corporation.
Until you take a closer look. Canned tuna has as much in common with bluefin as Jabberjaw does with Jaws. Unlike the store shelf chunky fish that keeps college students alive until they learn to fend for themselves, bluefin’s tender red flesh is sought after for sashimi and sushi. The best slices go for as much as $24 each in fine Tokyo sushi bars.
Kimura planned to serve the fish to customers later Saturday. Incidentally, he also held the previous record for paying way too much money for bluefin at auction too. That would be 56.4 million yen at last year’s New Year’s auction. The yearly event pulls in high bids as a way to kick off the new year/get publicity.