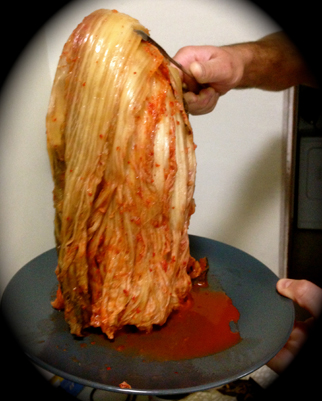 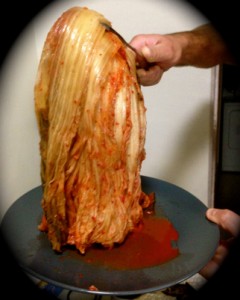 Writing and Photos by Brandon Stam

Kimchi (also known as gimchi) and Korean food in general are not cuisines that I have experienced often as a Native New Mexican. Most of the kimchi I had tried were American variations and therefore I was not entirely sure what kimchi was supposed to taste like. When I found out I’d be relocating to South Korea at the end of last year one of the things that I was most excited about was the opportunity to sample some authentic Korean food, including the national dish, kimchi. Once I arrived in Korea I found the cuisine to be somewhat intimidating, with all kinds of smells and flavors that my palate was not used to. Kimchi in Korea has a much more aromatic (also could be described as strong) smell than what I’ve had in the U.S. and it is everywhere you go.

Kimchi is a staple with every Korean meal here, often times as a side but other times it is featured in the main dish. At its core kimchi is fermented vegetables (napa cabbage, radish, scallion or cucumber are often the main ingredient) with a variety of seasonings, often including chili. There are hundreds of different kinds of kimchi that exist in Korea, so it is hard to pigeonhole kimchi. One of the most common varieties that I have experienced the most is baechu kimchi, which is made with napa cabbage. This is the kimchi I have seen at most restaurants in Korea, although at street markets you will often see other varieties. I live in a city called Uijeongbu, located in the northern region of Korea which is less known for spicy kimchi. Kimchi in northern Korea is known to be less spicy and salty as well as having more of a watery texture, all of which is consistent with the kimchi I have experienced thus far. In fact many of the spicy dishes in the northern part of Korea are often made to cater to Westerners who assume all Korean food is spicy.

Kimchi is traditionally made putting all the ingredients in a jar and burying it underground for months while it ferments. Many of locals where I live still use this method. My wife informed me that when she arrived to Korea that the smell of kimchi was everywhere, as locals are all keen to make their own versions. During a recent trip down to Daegu, located 3 hours south of Seoul we stayed with a Korean lady named Soonkyoo. In addition to being an amazing host she also had lots of knowledge about Korean culture and food. She even showed us her homemade kimchi, which is apparently becoming a less common tradition. She stored the kimchi in a special refrigerator, which we really realized we had at our apartment as well. She gave us kimchi for our return trip to use for attempting to make Korean dishes, which we are now trying to do. This kimchi was by far the most flavorful I’ve had in Korea, with a salty, briney yet spicy taste. Next step: figure out how to incorporate kimchi into actual dishes!