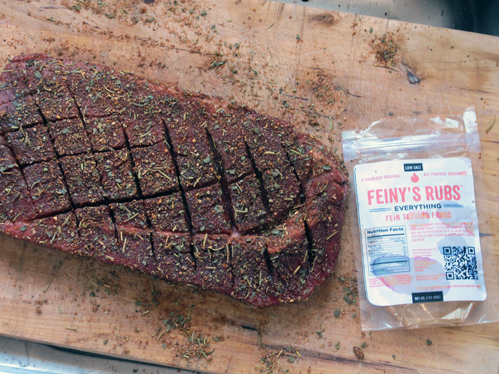 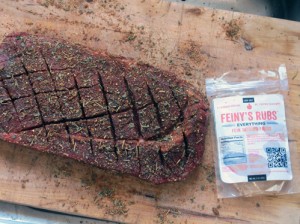 Now that I’ve caught your attention with a very tasteless pun, it’s time to introduce you to a very tasteful seasoning rub. Adam Feinberg is the big brain behind Feiny’s Rubs and last week I had the opportunity to try his Everything Rub on a 3 pound London Broil I was barbecuing for friends.

I first met Adam at last year’s World Food Championships and his enthusiasm for the chef’s craft is almost as tasty as this rub was to me. He’s currently a chef in Denver and has partnered up with Jonathan Knopf, Ribs Within BBQ Team founder Doug Keiles former partner-in-crime. They’ve formed their own team and hit the circuit earlier this year. 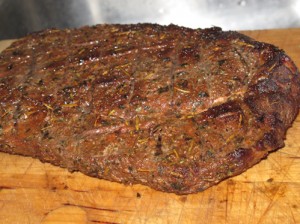 Feiny’s Everything Rub tastes very sweet when you pour a little in your hand (thanks to the brown sugar in it). During cooking, some of that sweet cooked off but it was still plenty present when I snuck a slice of broil while no one was watching (cook’s privilege, don’t hate). What wasn’t present was a whole lot of salt. This is a low-salt rub that really emphasizes the sweet and seasonings, including cinnamon, over the salty. It worked very well with the hickory chips I used to smoke the beef and everyone loved the finished product.