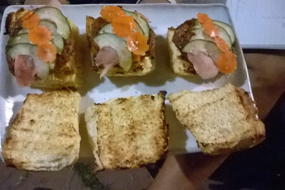 Scouting was over. I knew the conditions of the San Diego Burger Battle. Time to roll up the sleeves, plan, and execute. We would have two hours to create our burgers and turn in two presentation boxes–one for appearance judging, one with enough burgers to feed the four judges. You could provide each taster with their own full hamburger or chop one into fourths; sliders were an option too and you’d need one per judge to munch on.

There’d be 15 competitors launching in three heats, each heat a half hour apart. That way, judges don’t get swamped at once with all 15 entries morphing from hot and tasty to cold and mushy. I had to be ready to go in the first run, even if I wasn’t starting until the third one. Meaning, I’d need to get there early enough to set up all of my gear, make the competitor’s meeting, and be ready to hit the ground running right after. We had two hours from firing up the heat to turn in. Whatever battle plan I came up with had to be doable in under that time, taste as great as possible, look awesome, and be executed flawlessly.

That last bit has to do with the weighted judging. The SD Burger Battle prioritizes food just like it would be at a World Food Championships event, using its EAT method (Execution, Appearance, Taste). Appearance was 15%, execution 35%, and taste 50% of your final score.

And somewhere in all of this, I had to conjure a burger recipe that I thought would be fun, creative, and tasty. Then I had to perfect it. In less than a month.

Four weeks sounds like a lot of time to come up with a great burger recipe. It is. What it isn’t a lot of time for is practice. Coming up with a good hamburger idea and making it once is pretty easy. Being able to do it every time, under pressure, in outdoor conditions is what eats up most of your time. You make a trial run with your initial idea, maybe you even think you’ve nailed it on the first go. Hell, maybe you actually have pinned it down.

Unlikely, though. Especially for your first competition. Like Prussian Field Marshal  Helmuth von Moltke famously wrote, “No plan survives contact with the enemy.” You may think your idea is perfect out of the gate, but put together a cadre of taste testers with trained palates who’re willing to tell you your food tastes like ass just to be sure. People like this are invaluable sparring partners for perfecting recipes. Make test run after test run, incorporating constructive criticisms from them all the way, until they think you have a winner. At that point, grasshopper, you may have a shot at taking the pebble from the old master’s hand and winning your competition.

I think the key going into a competition like this is simplicity. You always see judges on TV knock recipes for trying to do too much. Bun, patty, some plant product, and a condiment. That’s all I’d need. If judging KCBS barbecue has taught me one important lesson, it’s balance the flavors. For those who haven’t judged barbecue, you have no idea how many entries get shot down for being too sweet or salty. I didn’t want either of those bullying the rest of the burger for its milk money. Balancing creativity and execution is also vital. You can only tweak a hamburger so much before it stops being a hamburger and turns into some weird mutation that happens to have ground meat in it somewhere.

Week 1: Concept
I needed a starting point. After some debate back and forth, I decided to make an Asian slider. Chinese cuisine does wonderful things with ground pork; translating some of those flavors into a little slider seemed pretty creative. I did some research online, made a shopping run with Babs Schwartz (foodie, food scientist, and drill sergeant) to Murakai Japanese supermarket here in Los Angeles, and got started. Her input was vital in making this burger happen.

Once you’ve made that initial choice of concept, you have a series of judgement calls regarding what goes with your idea. At this point I still had no idea for a bun. Steamed bao seemed like a natural but would be too damn mushy. There’s no real cheese in Chinese cooking, so it wouldn’t be a cheeseburger. My condiment and topping choices all had to complement the patty, so they’d need to be Chinese/Asian in origin also (remember: keeping it simple).

All I made that first week was a slider with Asian-seasoned meat. That gave me a baseline. My tasters all weighed in on what worked and didn’t; some had good ideas for the slaw I wanted to add.

Weeks 2 and3: Practice and Refinement
My first run was a success. All I was trying to learn was how well the patty’s seasoning worked. Everyone loved it. Now I needed (a) to figure out the rest of the plan, (b) time it, and (c) perfect the cooking time for consistent results. Bread was still an issue but the local grocery story carried little potato bread rolls. However, I narrowed down what I wanted for topping: a cucumber and carrot Asian-flavored slaw/relish atop slivers of pickled ginger for sweetness. I made the sliders twice each week and monitored the cooking times and temps. By the end of the third week, my testing crew had all given the little burgers their collective blessings. The bread issue worked itself out when I came across pre-sliced mini ciabatta rolls at the local supermarket.

On Equipment and Prep
All along the way, I found myself buying new equipment I’d need for the Burger Battle: a zester, surgical gloves, a canopy to keep the hot sun off my noggin, and a whole list of items. I’ll run that list at the end of this little saga in case you’re considering competing yourself. I strongly recommend taking notes of things you need for an event like this while practicing. You should also bear in mind that you’ll probably have to clean up all of your gear or be prepared to drive home with a trunk full of dirty dishes.

Time had run out by the end of week three. I had less than seven days to finish putting together my competition kit, then make it down to San Diego and make my run at a Golden Ticket to the burger event at this year’s World Food Championships. Hopefully, I’d planned enough, practiced enough, and knew enough…