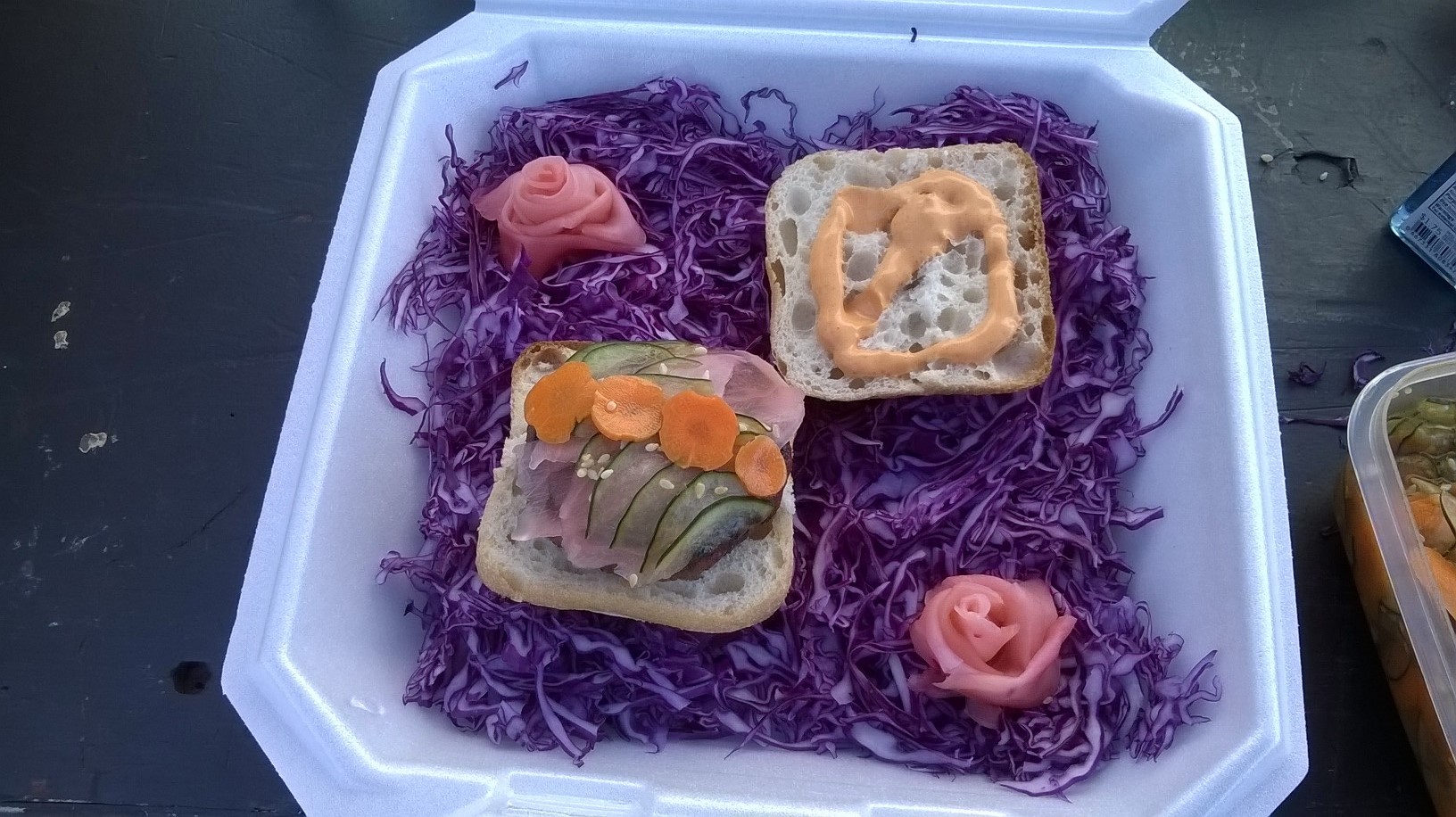 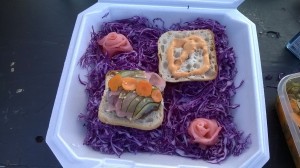 Time is the one currency you can never make back. Once it’s spent, it’s gone forever. Going into the last few days before the San Diego Burger Battle, I’d invested a good deal of chrono currency preparing for the big day, August 9th. Game time loomed and it was time to face the competition on the field of battle. 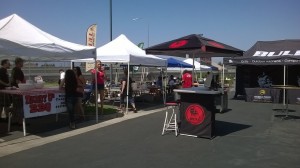 Taking the High Ground
Which was actually a parking lot but battlefield sounds more dramatic. I knew from working with Doug Keiles and Jonathan C. Kay at the Bare Bones Barbecue Competition that getting there early was vital. Not only do you get your choice of spaces, you get the one closest to the turn-in booth. That way, your walk is shorter giving you precious extra seconds that can make the difference between a last-second turn-in and a DQ. My assistant, Sam Taylor, and I arrived at the competition site, Carddine Home Resort Products in San Marcos, in plenty of time to get the space we wanted, a straight hole shot from the turn-in desk.

We weren’t the very first boots on the ground but we had plenty of time to set up before the competitors’ meeting. The canopy went up, we positioned our 6-foot table under it, and started setting out all the implements in our arsenal for building what we hoped would win a Golden Ticket to the World Food Championships burger event in Vegas. Keeping everything organized at this phase is vital. Looking for tongs or spices eats time and we only had two hours from lighting the coals to turn-in. I grouped together items I’d be using at the same phase into little groups (sauces and spices next to the mixing bowl for the patties, condiment next to the ciabatta rolls, slaw and sliced ginger toppings together, etc). Sam did the same for the Weber grill we’d be cooking on, then it was off to the meeting.

Ladies and Gents, Start Your Grilling

This event was going to be in three heats. The San Diego Burger Battle was invitation only and limited to 15 teams. Each heat had five teams. We drew lots and, just as I predicted, had to go in the first heat. Sam and I headed back to our setup, then spent the longest half hour in human history waiting to start. 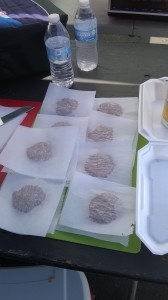 A slider press and parchment sheets were vital to making sure the patties held uniform shape.

I knew two hours was too long for me. My whole process, from mixing the meat to prepping appearance took only an hour, every time. That meant I’d have to actually drag out the process unless I wanted to turn in sliders that had been sitting out for an hour. I was pretty okay with that. In my opinion you want extra time in a competition. It’s far easier to stretch out cooking process to fill time than to cram a cooking process into a time frame that’s two sizes to small. Also, if something goes wrong or you’re missing a vital ingredient, you can send your assistant out to get it while you man the fort (or vice-versa). Neither of those obstacles jumped in the way, though, and I just took my time making sure my pre-grilling prep was perfect, then had Sam start the goals an hour in. No point in burning coal that isn’t going to cook anything, yes?

I made more sliders than I needed. That wasn’t an accident. The competition mandated two separate boxes: one for appearance grading only, the other for eating. There were four judges; I needed a slider for each, plus at least one for the appearance box. A pound of meat yielded 12 sliders. Making extras means (a) a selection of burgers from which to choose in case something goes wrong and (b) food for you to munch on while you anxiously await the outcome after turn-in. When it comes to chewing on a slider or my fingernails, I’ll take the slider every time.

Beating the Clock
We finished grilling two minutes into the ten minute turn in window. I’d already prepped my appearance box with two pickled ginger roses on a bed of shredded red cabbage. Rules regarding garnish were simple–garnish was optional and limited to floral or edible vegetation; no props allowed. Having watched the WFC a few weeks prior, I was happy the burgers would be judged totally on their own merit. No foofy beverages to distract the judges’ palates and mask imperfections in the main dish. 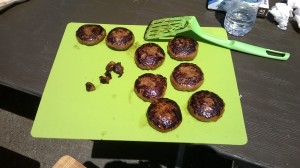 (although I did set them all out first to pick and choose; one extra gave its life when I checked for doneness)

Eight minutes to lay out five perfect sliders and turn them in may sound like a lot of time and it is if everything goes well. I’d prepped and planned so that the patties coming off the grill just had to be seated in the buns, topped, and turned in. In fact, most of that preparation was taken care of before they even went onto the grates so I could focus on not overcooking them. 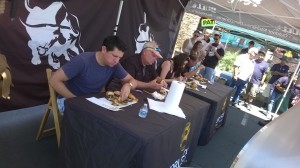 After turn-in the waiting game started. My buddy Louis Philips and his family joined us in our booth area where we finished off the leftover sliders. I didn’t win the competition but I wasn’t upset about my performance, either. The places were so close that first and second were a dead tie for points out to the fourth decimal place. Even the next three teams were similarly tied for 3-5th places. My scores were good; theirs were just better. Overall, I really enjoyed the experience and plan on doing more next year. In a couple of days, I’ll post that equipment list for you.