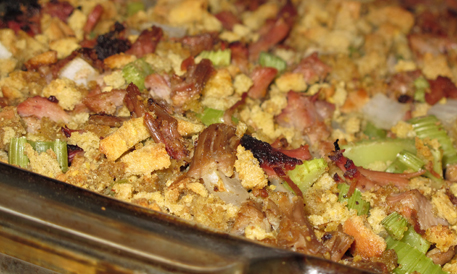 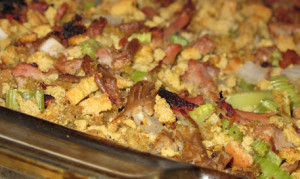 A few years back, some of our favorite food writers collaborated on a barbecued Thanksgiving on our mother site, the Fiery Foods & Barbecue Super Site. drawing inspiration from that idea, me and mine cooked up our own take on that awesome theme. Here’s the first part of that big adventure: Dr. BBQ’s pulled pork stuffing and a pulled pork gravy.

Ray Lampe was one of those collaborators and his pulled pork stuffing sounded tremendous, and it was. Using Ray’s pulled pork recipe from Slow Fire, I coaxed a pork butt into the concentrated heaven that is pulled pork for the stuffing. It smelled wonderful, tasted wonderful, and that’s when I heard the voice calling to me from the depths of the pork’s aluminum foil blanket. 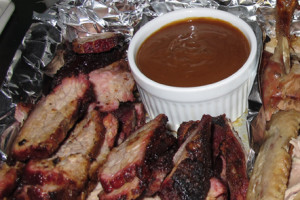 “But, Mark,” it chimed in. “What about me? What about meeee?” At least, that’s what I think the pulled pork drippings would’ve said if they could’ve talked. All the spices, apple juice, and pork drippings melded into a very tasty pool under the cooked beast itself. The juices had a point, though. Why throw them away like common sense at a Congressional hearing? Pulled pork gravy became my tweak to Ray’s original stuffing.

Note: Since we were barbecuing sizable cuts of meat, we needed to start really early. We’d need as much time as possible for the pork shoulder, beef brisket, and turkey to get done. Thanksgiving is no joke among my crew. It’s an all day affair that’s organized via spreadsheet, ensuring everything comes together at pretty much the same time. Message us on Facebook and we’ll send you the spreadsheet for your own use.