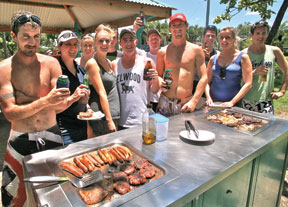 Let me smash a common misconception about Australian barbecue: Down Under, they cook prawns —no one here “slips another shrimp on the Barbie.”

In fact, cooking shrimp, er, prawns on a barbecue was never all that popular. At least, not until a certain macho, crocodile-wrestlin’ movie star uttered the quote in a 1980s ad campaign to get Yanks to go Oz (that’s Australia, for those of you who can’t keep up).

Aussie barbecues back then usually consisted of “mystery bags,” or “snags” of various sorts—that’s sausages to you and me—which were cooked up on flat grills or hot plates. “Don’t fork the snags,” was the warning heard most often, as an inexperienced griller might puncture the snag with his or her fork and let all the juices leak out.

Like their U.S. counterparts, Aussies today are much more sophisticated when it comes to grilling. Today’s barbecue menu might feature such exotic fare as Malaysian spotted prawns marinated in Chinese hoisin and Japanese sake, dusted with lemon myrtle and drizzled with a honey-onion-macadamia nut sauce.

Aussies use their barbecue grills much more often than we Americans do. In fact, we’re third on the list of the world’s most avid barbecuers, after Australia and South Africa. Even the government participates by mandating free gas or electric barbecues in parks, beaches, and campsites. And if you come across the rare Barbie that’s not free, the twenty cents to operate is still a deal.

Even boaters and yachtsmen take part in the barbecue craze, mounting stainless steel propane barbies on the aft decks of their vessels. Three-quarters of the yachts we saw on an afternoon cruise had barbecues mounted on the stern rails.

And when we consider Aussie barbie, let’s not forget that the native aboriginals where here first, about 40,000 years before the British Empire landed a boat full of convicts on the continent’s shores. In that time, the aborigines perfected “bush tucker”—the fruits, vegetables, and game harvested in the wild—and the best methods with which to cook it. That’s right, barbecue.

Read the full article, as well as Rick’s recommendations for the best restaurants Down Under in the May/June issue of Burn! Magazine, out now.