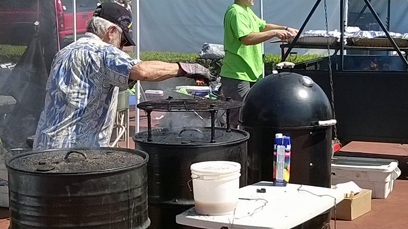 This year’s Santa Anita Winners Circle BBQ Championship was huge. At least for California. With 100 teams battling it out for $15,000 in prize money, it was the largest KCBS event in the state’s history.

Arcadia’s Santa Anita racetrack was the backdrop for this fourth annual barbecue battle. I’ve judged here three out of those four years and each time it’s grown almost exponentially over the last. Whether that’s because of the incredible weather, the lure of betting the ponies, or just the fact that it’s a sizable venue near a major population center is a matter of conjecture. I really wasn’t expecting triple digits in competitors, anyway. 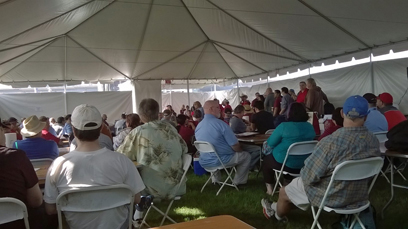 Having that many teams necessitated a similar number of hungry mouths to pass judgement on them. We piled 17 tables in barbecue judges into the tent this year, all ready to get to work and score chicken, ribs, pork, and brisket.

This year’s festivities were just a little different, though. Not only were there the usual Big Four of any sanctioned competition, the young ‘uns threw down steak and burgers at a Kid’s Q Competition.

For those of you keeping score at home, here are the overall top ten teams for the event: