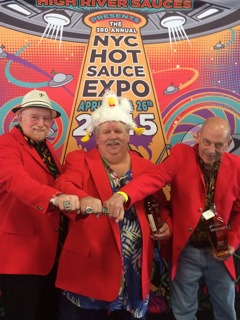 A few months back, our own Dave DeWitt was among the inaugural nominees for the new Hot Sauce Hall of Fame. The winners were announced at the New York Hot Sauce Expo this weekend. How easy was it to get in? Well… 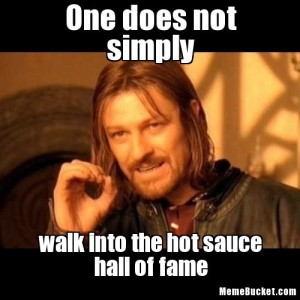 First you had to get nominated, then voted in by your industry peers. Any way you look at it, the event was the next step in a journey. For creator Steven Seabury, it was the first baby steps for the Hall of Fame he created. For the inductees, it was the next step in the long hot sauce journey that started years ago when they first broke a sweat from the bite of a pepper. Dave DeWitt, John Hard, and Chip Hearn were the inductees on hand for the honor. Each received a swanky red jacket and a coveted reward for the honor. 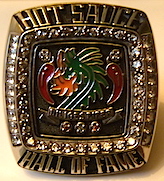 Here’s what The Pope of Peppers had to say about becoming a Lord of the Ring: 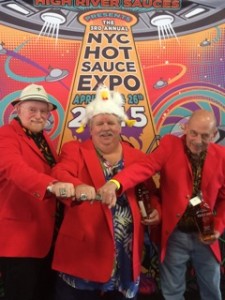 Right after this, a beam of red energy shot out giving fifty people two-day burn.

Yesterday, I was one of the first five inductees into the Hot Sauce Hall of Fame. This happened at the New York Hot Sauce Expo, and both were the brainchild of producer Steve Seabury, who feels that it’s necessary to recognize the history of the fiery foods movement in this country, and says that “Dedicated people have made this history, and I want them honored.” He proposed ten nominees, and supplied ballots so that industry members and fans could vote for their five favorites to be inducted. The five were the late Edmund McIlhenny, who invented Tabasco sauce back in 1868. Dave Hirschkop was inducted too, and he’s known for his introduction of Dave’s Insanity Sauce. The five crazies pictured were the remaining inductees into the Class of 2015. On the left is John Hard, owner of of CaJohn’s Fiery Foods and one of the top hot sauce makers in the country. In the middle is Chip Hearn, owner of Peppers.com, one of the top hot sauce retailers. I’m on the right, and all of us are wearing our winners’ sport coats and are showing off our “Superbowl”-type rings. I’m honored to be an part of this initial group of inductees, and I thank Steve for this honor and congratulate him on an excellent an excellent and well-attended Expo.

A hearty congratulations to all of the inductees. You’re the cornerstones of the modern hot sauce industry and without you and those you’ve inspired, there might not be a smokin’ hot hot sauce market today.