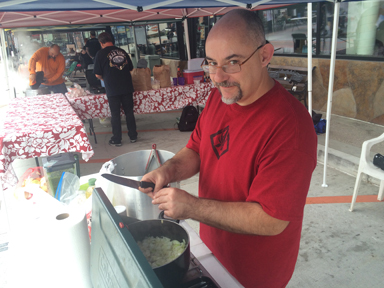 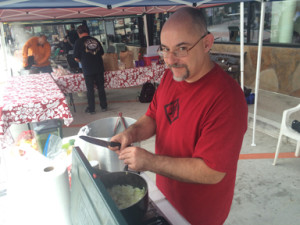 I finally took the plunge and broke my chili competition cherry. Not only that, this was my first time making chili that didn’t magically appear when I opened a can labeled “Hormel.” Or, I should say, “chile” since I made a chile verde instead of the red stuff. Bartels Harley-Davidson held their annual chili cook-off in Marina del Rey yesterday and I thought I’d buck tradition with a little mean green. 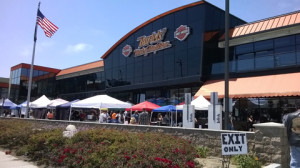 The cook-off is over a decade old now and for years I’ve kept meaning to compete there. Our schedules just didn’t coincide. This year, I made it. Seeing as how I had no time to train up like I did for the San Diego Burger Battle last year, I didn’t exactly go in thinking I was going to win.

And I was right. 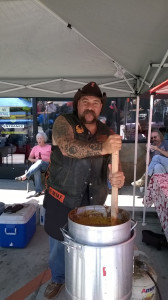 I did the best I could, though. Although I didn’t win over the judges, I was blown away by the responses from the attendees. People liked that the verde was something different from the red chilis offered by the other 13 teams. Folks came back for seconds, thirds, and one guy even hit me up for samples four times! My close buddy Billy Bartels wandered the event and told me that people were recommending the chile verde to each other. I couldn’t be happier with the experience, not just as my first chili competition, but also as my first attempt at making chile(i) verde from scratch! The heat profile was much milder than I anticipated but I’ll correct that next time. Other than that, I’m very happy with it as a baseline for fine tuning. Here’s the recipe I used so you can try it if you like.