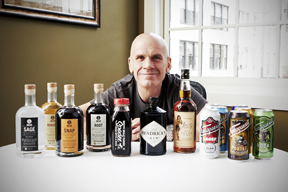 That question is particularly interesting because outside of a very small corner of the liquor industry, nobody knows who this Steve guy is.

Steven Grasse (pronounced with a silent e) is subtle and subdued when you compare him to the brands he’s created in the last 15 years. Once an ad man for the likes of Puma and Camel cigarettes, Grasse’s passion has led him to create some of the most iconic and unique liquors in recent history. Here’s the kicker: unlike Jack Daniel (featured on a previous post), Grasse is still alive and making great liquor.

Steven Grasse’s ad agency Quaker City Mercantile has represented many clients over their 25 years in business, but Grasse is happy that those days are past. “Yeah I used to be an ad guy, but I’m glad I’m not anymore” Grasse says. “Our hobby was to create our own brands, though. We started with a film series called Bikini Bandits, featuring strippers who robbed stores, then started the GMart Convenience Stores, too.” Quaker City then started the Sailor Jerry clothing line and created a companion rum to help sell their clothes.

William Grant and Sons, a liquor conglomerate that covers big brands like Stoli Vodka, took notice. They bought the brands, and the story, from Quaker City. 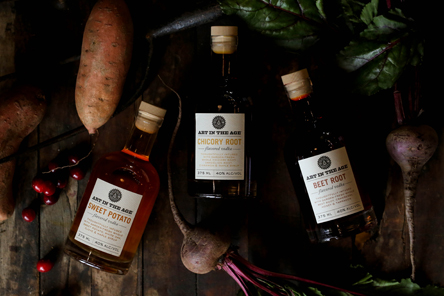 Steven Grasse continued to create, too, and invented another liquor line, officially titled Art in the Age of Mechanical Reproduction. He told me “We created Art in the Age the day we sold Sailor Jerry, and we purposely made it the most challenging brand ever. We said ‘alright, we’re going to have the plainest bottle possible, and we’re going to put the weirdest liquid in it, and we’re not going to make it obvious where to look for it in the store.’” William Grant and Sons bought that brand too.

Art in the Age’s spirits line currently has 4 liquors: Sage, Root, Rhubarb, and Snap, the last of which was developed from Grasse’s grandmother’s ginger snap recipe. “I worked with our resident chef to create a liquid version of that recipe, then we sent it to our distiller and said ‘make that into a liquor.’ We chose our favorite, and you have Snap.”

After that, Steve helped create Spodee, “Wine with a Kick,” a sortof backwoods moonshine wine/herb drink that comes in old milk bottles. Then he revived Narragansett Beer, an east-coast staple that’s 100+ years old.

“Making spirits is no different than being a chef” Grasse says, and though flavored vodkas and whiskeys have been big sellers in recent years, people don’t have the deep connection to those brands in the same way they do to Hendrick’s or Sailor Jerry. “It’s shitty vodka with chemicals” he told me, “Three Olives is the Ed Hardy of spirits.”

Grasse’s team don’t market test their liquors, and he told me that most of their ideas come from history books, not barrooms. He says “I’ve seen quite a few ad agencies emulating what we’re doing, and they’re all belly flopping.” He stressed that the quality of the liquid in the bottle is the most important thing, otherwise you’re just “selling a gimmick.” Grasse says “we’re a genuine liquid firm that knows something about marketing. We know how to build a community around our brands.”

In summer 2015, Grasse is opening Tamworth Distilling, which supplements the current Art In The Age line with an original Barley Vodka and a series of infusions based on it, starting with sweet potato, chicory, and beet (pictured).

You can find out more about all of Steven’s work at Quaker City Mercantile.