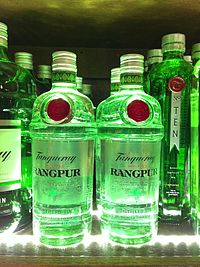 Gin mastermind Charles Tanqueray can be a mysterious player in the world of liquor. Nearly 200 years after he crafted one of the world’s most lasting booze brands, there are few details about Charles that follow his green barrel-shaped bottles around the world. In a phone interview, Tanqueray’s current Master Distiller Tom Nichol gave me some insight into the legendary man.

Roots
Charles’ great-great grandfather David, originally from France, was the first Tanqueray in England, where his gold- and silversmithing skills were so sought after, he received royal recognition as the “Subordinate Goldsmith” to King George II.
Similar in some ways to the Guinness family of Ireland, the Tanquerays were successful in business, family, and the church. Charles’ father was a minister of the Church of England and at the age of 41, his dad married a 17-year-old and began having children. Charles was born sixth of a total of 14 Tanqueray children. 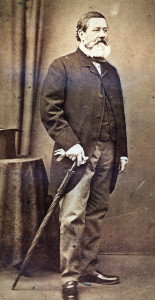 A Genius
Charles Tanqueray was passionate about making things and he invented many items over the course of his life. Some examples include a formula for horse saddle polish and medicines for injured animals. Master Distiller Tom Nichol, the only person in the world with access to Charles’ personal diaries, legers and recipes, told me “Tanqueray was a genius.”
It’s often reported that Charles rejected his father’s life in the church to distill gin, but there’s no evidence that Charles was on that track at any point. He was smart, to be sure, but Charles didn’t show any interest in attending university. He sought to invent, to create, and to experiment. 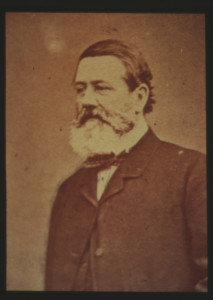 A Gin Genius
As a budding entrepreneur, Charles eyed other successful British gin distillers Felix Booth and Alexander Gordon, and decided to create “a better gin than theirs,” says Nichol. In his early 20’s, Charles Tanqueray developed several gin recipes, but it was his London Dry recipe that proved unforgettable. Nichol, the keeper of Tanqueray’s secret recipe, says “Charles won the lottery with that one.”
Charles Tanqueray reveled in his success. “He wasn’t the genius recluse like we sometimes see today, but I think he was a genius who told everybody he was a genius. From his proud stature, to his knee-length frock coat, to his stately moustache and beard, Nichol says that “Charles Tanqueray liked to show off his success.”

Family Secrets
While Tom Nichol has access to detailed records, writings, and receipts from Charles’ business, Tanqueray’s personal life is strangely undocumented. This leaves us to wonder: was Tanqueray obsessed with his business, but absent from his family? Or was he just a very private man who sought to protect his loved ones? By any account, we know few details of his personal life, like how many children Charles had.
The one child we do know of, Charles Waugh Tanqueray, took over his father’s distillery after his father died at 58. Tanqueray’s historians call Charles Waugh “an upright Christian gentleman of forceful character yet with social conscience,” and just like his father, Charles Waugh was a very young man when he began distilling. More of a businessman than an inventor, Charles’ son placed his attention on gin exclusively, resulting in Charles Waugh growing the Tanqueray brand even larger in his tenure than his father, including a merger with Gordon’s Gin—one of his father’s inspirations and competitors—in the late 1800’s.
Charles Tanqueray really seems to have been a proud genius who both flaunted his talent and shrouded his family in mystery. Today, Tanqueray stands as one of the oldest and most successful gins in the history of the world (bonus factoid: Tanqueray is also my favorite gin).