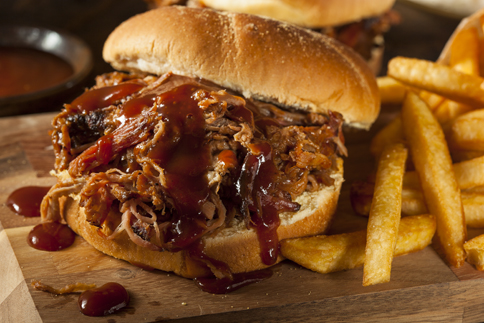 Barbecue cooks have individual preferences about the proper meats and sauces to use, which differ from region to region. The various seasoning methods produce different results, and can be divided into three main categories: rubs–wet and dry, marinades, and sauces. Following are descriptions of each, along with cooking suggestions and recipes. Although barbecuing is one of the oldest cooking methods on earth, remember that the rules are not set in stone. Use these guidelines as a base, then create some classics of your own. 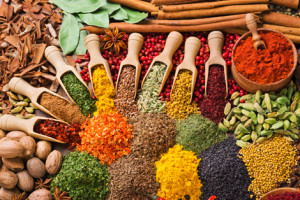 Rubs
Rubs come in two forms, either dry or wet. A dry rub, sometimes called barbecue spice, is a combination of ground spices and herbs. To use a dry rub, spread thickly over the meat and rub into the surface. Wet rubs or pastes are literally dry rubs that are bound by a liquid, usually oil. Because they cannot be applied as thickly, they are milder in flavor than the dry versions, which makes them good on delicate fish or poultry. The exceptions are the Jamaican jerk pastes which are fiery and strongly flavored even when thinly spread. Besides adding flavor, wet rubs also help keep the meat moist during long cooking periods. Meat is also usually treated with a rub, paste or marinade before it is smoked. These all add flavor, and, in some cases, assist in tenderizing the meat. When using a rub on chicken, be sure to rub it on and under the skin. Allow the rub to soak into the meat, almost forming a crust, before cooking.
Rub ingredients vary depending on the meats for which they are intended. Most rubs contain paprika, black pepper, ground chile, and garlic powder. Salt and sugar are common, although some feel that salt dries the meat by drawing out moisture, and that sugar can burn during cooking. Bruce Pinnell of Big Bruce’s Gunpowder Foods is experimenting with different wood flavors in his blends. His Cactus Trail Fajita Seasoning uses applewood smoke to produce a slightly sweet taste. 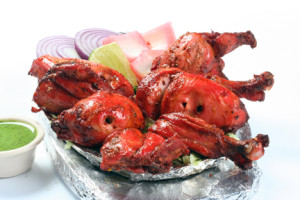 Marinades
A marinade is a seasoned liquid that contains a tenderizing acidic ingredient such as vinegar, wine, soy sauce, or citrus juice. Marinade seasonings can be a combination of herbs, spices, and even vegetables, but they generally reflect the tastes of the region in which they were made. For example, Bubba Brand Back Bay Marinade from South Carolina contains bourbon and peaches, while Chuck Evans’ Mayan Magic (Montezuma Foods) uses exotic annato seed and sour orange juice to duplicate the taste of a pit barbecue, or pib, in Yucatán.
Regardless of the ingredient combination, all marinades are used by soaking meat in them to add flavor and to tenderize before cooking. Always follow the directions carefully since some foods, especially fish and shrimp, can become mushy if left in too long. Always be sure to marinate in a non-reactive pan or a plastic bag. 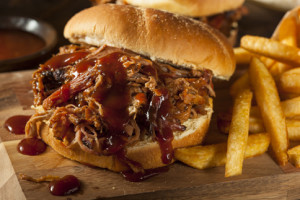 Sauces
There are regional differences and preferences regarding types of sauces and sauce bases. Southern sauces are typically vinegar and pepper-based, while South Carolinians prefer mustard. In the Midwest and Texas as well as farther west, the sauces are most often tomato-based and spicy. In the far West, fresh herbs and citrus fruits are used.
Additionally, there are Asian barbecue sauces, and some that use alcohol like Jim Beam bourbon or Zinfandel wine for flavoring. Specialty sauces include one designed specifically for game, and another white barbecue sauce for fish and poultry. The chiles in some of these sauces vary from mild jalapeños to fiery habaneros and African bird peppers, as found in Mad Dog BBQ Sauce. However, the tomato and ketchup-based types still outsell all others.
One thing almost all these sauces have in common is a sweetener, which can be sugar (white or brown,) honey, molasses, or even maple syrup. Because sugars tend to burn easily, sauces should only be used during the last hour of cooking. This is especially true with tomato-based sauces which will blacken long before the meat is done.
All of these sauces provide an easy way to prepare tasty dishes in a relatively short period of time. While it’s difficult to find the time to prepare and simmer your own sauces these days, you can quickly turn a commercial product into your own signature sauce by adding ingredients such as chiles, hot pepper sauces, ginger, or even fruits.