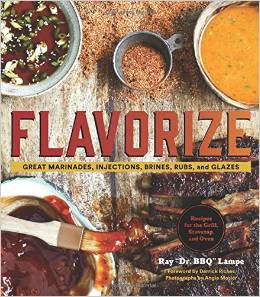 With barbecue, much like with good sex, technique makes all the difference. Put the wrong thing in the wrong place at the wrong time and you end up with a bad taste in your mouth. Dr BBQ’s, Flavorize, hones in on a topic barbecuers spend years trying to perfect: the techniques for getting the best flavor into ‘cue and grilling. Not cooking itself (although there is plenty of that in the book), but the marinades, injections, brines, rubs, and glazes that bring great flavor to outdoor cooking. I pinned down Ray “Dr BBQ” Lampe for a quick Q&A about the book. Here’s what he had to say.

Burn!: What inspired Flavorize? Why did you write it?
Dr BBQ: “It actually was my editor’s idea. Chronicle is very good like this. They look for ideas to create books. They know what I can do. They came up with the idea for a marinade, injection, and rub book. I thought it was the perfect thing for me to write. Rubs are the most important thing in my cooking. Brining was a great opportunity to learn something I hadn’t done much. Most people over-brine. It ends up tasting like lunch meat to me. Why would I do that? When I went to write the chapter, I learned you don’t have to brine for days. Salt is the main thing you need; you can’t cheat on that but you can with the other parts in brine. You can also cheat with smaller cuts of meat. At the same time, I studied. Harlold McKee’s book, On Cooking. He says even if the brine only works its way a quarter of the way into the meat, it will dry anyway and that’s all you need.
Injections were something I was already familiar with from competition and modifying inj for the real world, making it less dramatic. So I really enjoyed writing the book. People who know how to cook don’t need full recipes so giving them a book like this was good.”

Burn!: Do you have plans to venture out of barbeque or more books along this line?
Dr BBQ: “No, not at this time. Pork Chop wasn’t a barbeque book. I’ve been fortunate to crossover to the mainstream. There’ll always be these sort of manly Dr BBQ books with meat in them. I may write more books that aren’t barbeque-centric. I’m certainly conscious of this. After three books, I thought, ‘How many barbeque books can I write?’ I think the books will always be barbeque hybrids at best, but thanks for noticing.”

Burn!: What didn’t make it into Flavorize, if anything?
Dr BBQ: “I can’t think of any specifics but what does end up happening, is I cannibalize myself without being aware it’s happening. There are only so many cuts of meat. I really like orange juice and garlic marinated flank steak, for example. I catch myself reusing recipes in books like that. You start off with more recipes than you really need and some fall by the wayside. For me, the problem more is stealing ideas from myself.”

Burn!: Do you have a favorite in Flavorize?
Dr BBQ: “I think the maple-brined pork chops are something I’d like to see people try. Cocoa-rubbed tenderloin looks really good when it’s cooked. That unsweetened cocoa looks cool to me and has great flavor when it’s done.”

Burn!: What do you want mentioned about the book?
Dr BBQ: “I want people to experiment nad use recipes their own way. The way I wrote it, each recipe is a standalone with icons recommending it for things. Don’t get stuck on them, though. There’s a margarita-glazed salmon in the book. I was in the field with Cabo Wabo Tequila and salmon wouldn’t have worked when I went to cook there so we used chicken and I think it came out better than the salmon! So experiment with it.”

Flavorize is on sale now. You can find it on Amazon here. Until your copy arrives, here’s the recipe for the maple-brined pork chops to tide you over.