In our larger story, The Day of the Dead, with a Menu and Recipes, we give you some ideas for the holiday right after Halloween. No, not the one with too much turkey and cranberry sauce. The one before that: El Dia De Los Muertos; the Day of the Dead. One such idea is this Bread of the Dead recipe we ran in that story.
In Mexico, bakeries advertise different shapes of the bread for the holiday. The most common is round; others might be shapes of human beings, animals, especially rabbits in profile. Some bakeries hire extra bakers to produce loaves to meet the huge demand for this bread. 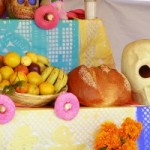