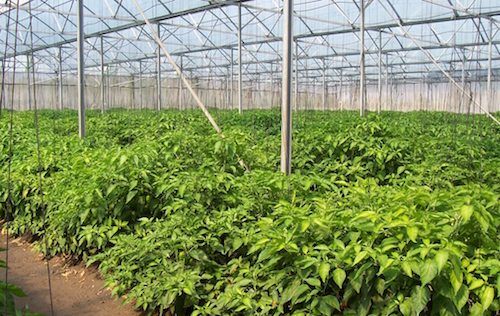 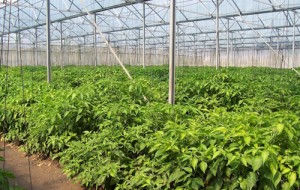 Habaneros Growing in a screenhouse in Yucatan

The question of the month: to what degree is the heat of chiles affected by the growing environment? It has long been assumed that about eighty percent of the heat level is fixed genetically and the remainder is determined by environmental factors. But some experts now believe that the environment plays a much larger role than was originally assumed.

The questions arise because of apparently declining heat levels of domestically-grown Habaneros. In recent high performance liquid chromatography tests at New Mexico State University, California orange Habaneros have been measuring about 80,000 Scoville Units–far less than the 250,000 level of Habs from the Yucatan Peninsula, which were the progenitors of the domestic Habs.

Scientists have long known that stress factors–such as too little or too much water–can dramatically increase the capsaicin levels in the pods. But now they suspect that other environmental factors are operating as well, such as soil composition and pH, relative humidity, amount of ultraviolet radiation, fertilizers, and day and night temperatures. One theory holds that chiles grown under near-perfect conditions would be milder than clones cultivated in a less perfect environment. But how much milder?

A comprehensive study is needed to determine which factors affect the heat levels in chile pods. Such an experiment would be an ideal project for a graduate student in horticulture, and the directors of The Chile Institute are investigating the possibility of sponsoring such a study.