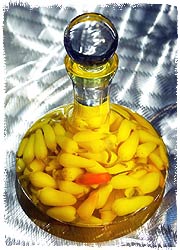 Having harvested my first round of habanero and ghost pepper hybrids, it’s time to do something with them other than fear them. Let’s pickle them peppers! Here’s a quick set of rules you’ll need to follow for pickling yours at home too.

Sterilize jars and lids in a boiling water bath for 10 to 15 minutes. We generally bring a large pot to a boil with an inch or two of water, along with a folded dish towel on the bottom of the pot. Jars are then placed, mouth down, into the water, along with the lids which can just be set between the jars. We then turn down the heat just enough to keep the pot slowly boiling or simmering. Shelling out the extra for a canning kit is highly recommended, though. 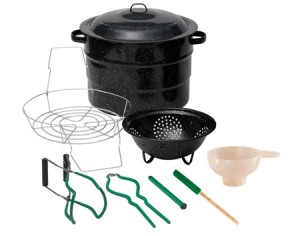 This Granite Ware kit is awesome for canning and pickling.

Use pickling salt, rather than table salt which contains undesirable (for pickling) additives. Pickling salt is free of the additives that turn pickles dark and the pickling liquid cloudy.
While cider vinegar is more flavorful, 5 to 6 percent distilled white vinegar should be used to avoid discoloring the chiles. Note that we do use cider vinegar when discoloration is not a problem.
Do not boil the vinegar for a long period of time as that will reduce the acidity.
Poke or cut a hole in each chile to keep it from floating and also to allow the pickling solution to work into the entire chile.
After filling each jar, remove any trapped air with a spatula or knife blade inserted between the chiles and the wall of the jar, or by gently tapping the jar.
After processing in a boiling water bath, remove jars to a draft-free location and allow to cool for 12 hours before handling.
If you want to know more and scope some recipes for pepper pickling of your own, check this out.