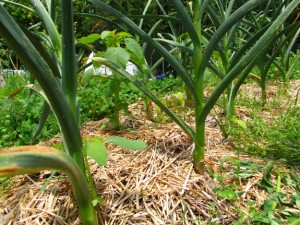 Chile peppers and weeds make lousy roommates. In the plant kingdom, weeds are the lazy slobs and skeazy ne’er do-wells that make life hazardous to anyone around them. That’s because over 150 types of weeds harbor insect-transmitted viruses that can harm peppers, for one thing.

But wait, there’s more. Weeds often grow faster than peppers and cut off all that nice yummy sunlight, while stealing nutrients and moisture from the soil to boot. Not to mention that they’re fugly and produce seeds that will sprout in the garden the following year.

Like other dirty slobs, weeds are dealt with by proper hygiene and personal maintenance. If your garden is mulched properly, that can take care of the problem but the key is vigilance. Some species of weeds boldly grow where no other weed has grown before: right next to the pepper stem. That makes them hard to see under the canopy of leaves generated by your pepper plants. Other weeds, such as Bermuda grass and bindweed, love to invade the garden from other parts of the yard, cross over the top of the mulch, and sometimes establish themselves next to pepper plants. 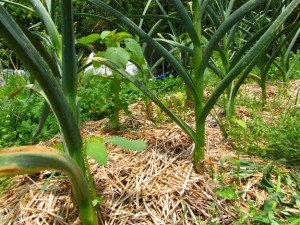 Straw mulch. Good mulch helps but a sharp eye and a strong hand help too.

Trimming them back is a bit like manscaping a wookie. You really have to stay on it. That said, while hoes and shovels will certainly get rid of them, they’re a sledgehammer approach to a scalpel problem. Removing weeds with those tools can damage the leaves, stems, and roots of peppers grown on ridges, for one thing. Herbicides will work but they aren’t really necessary in a home garden; they also may kill bees, which as we all know, pollinate flowers like those found on pepper plants. Removing them by hand is far more precise than a hoe or a shovel and doesn’t poison bees. Yes, it takes more effort, but it’s worth it in the long run.