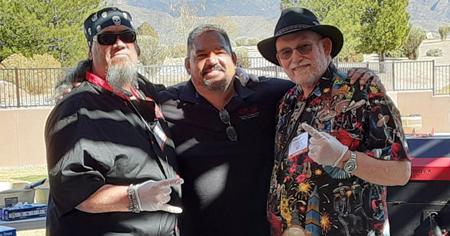 If you’re going to find yourself caught in a fiery whirlwind, I recommend the National Fiery Foods and Barbecue Show. Unlike its cousins in the world of natural disaster, the Fiery Foods Show doesn’t throw trailer parks into the air or drop houses on witches in ruby slippers (I mean, evil or not, that’s just plain rude, Kansas tornadoes). Which isn’t to say you can’t get into trouble at the show; go overboard with the spicy and you’ll definitely pay the price. Not that I’VE ever done that at the show. Twice. 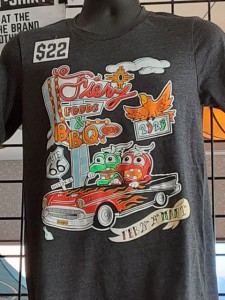 Just past the gate, attendees got a look at this year’s official shirt. 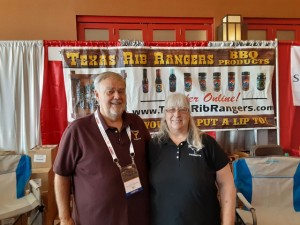 The 2020 show was pretty smooth sailing, though. Exhibitors were set up at Sandia Resort & Casino on Friday, selling hot sauces and other chile-related products to those lucky enough to skip work early and hit the show. 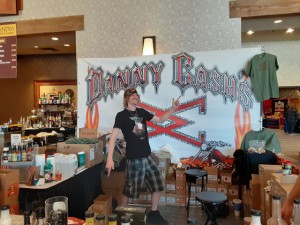 Danny Cash’s, not having any fun at the show, ever #sarcasm 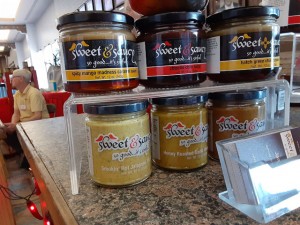 Saturday is when things get real at the show, though. Most people have gotten paid that Friday and they’re chomping at the bit to spend some of that green at the event. They’re off work, church isn’t until Sunday, and it’s time to play. That’s also when you’ll find DISC-IT cooking up a storm on the outdoor patio, demo-ing products from the show exhibitors and giving out free samples. 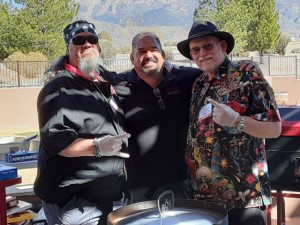 Fiber Joe, Nevin Montano, and CaJohn getting ready to treat the crowd to shrimp and veggies done up with CaJohn’s Black Garlic Hot Sauce.

The 505 Food Fights also kicked off on Saturday. Round one saw Raul Maestas (chef/owner of Ohana Hut), Kaainoa Ravey (chef/owner of Restaurant Kaai), and Ilie Spilca (chef/owner of Desert Sky Cafe) pitted against each other in the first round. Battle two featured Bri Arviso (chef, The Shop Breakfast and Lunch), Anthony Devontenno 9chef/owner of Modear Food Truck and Catering), and Martin Torrez (Executive Chef of Artichoke Cafe). The winners of each round went on to the final round on Sunday.

By Saturday afternoon, the line not only snaked along the stanchions, it trailed all the way through the casino floor. Yeah, it was kinda busy…

Attendance was very heavy until well into the afternoon. When I checked in with some of our exhibitors to see how the day had gone for them, some were already out of products, others would soon be on Sunday, and others were hanging tough with plenty of stuff to sell. All of the ones I spoke with were happy with Saturday’s business, however.
After cutting loose and catching some shut-eye, the exhibitors hit the floor on Sunday and re-opened up shop. The Sunday rush hit early and lasted for a few hours before ebbing in the afternoon. Meanwhile, the 505 Food Fights continued. Jessie Rae Arbogast (chef/owner of The Zia Chef), Sara Tori Green (chef – Sunrise Springs Spa Resort), and Carmen Rodriguez (Executive Chef of Sweetwater Harvest Kitchen [Santa Fe]) battled it out for third round. After that, the winners of all three rounds (Ravey, Torrez, and Rodriguez) stepped back into the fray to determine the champ. When it was all over, Carmen Rodriguez emerged victorious with the championship title.
The fun didn’t stop there, though. All through the weekend, DISC-IT took entries for its drawing of a brand new discada grill. 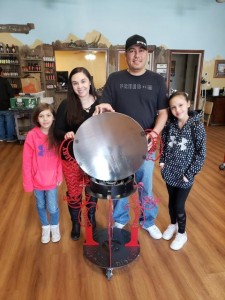 Congrats to M Martinez on his big win!

By the time the show closed Sunday at 6 pm, everyone seemed pretty happy with the show. The National Fiery Foods & Barbecue Show returns March 5 to 7, 2021. See the full gallery of this year’s festivities on our Facebook page.