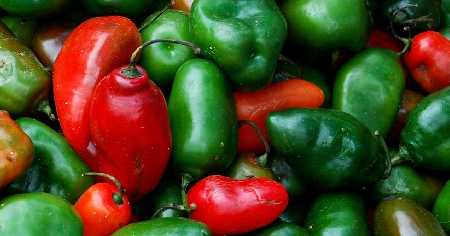 According to botanists, the genus Capsicum, to which all chileschiles belong, originated in the remote geologic past in an area bordered by the mountains of southern Brazil to the east, by Bolivia to the west, and by Paraguay and northern Argentina to the south. Not only does this location have the greatest concentration of wild species of chiles in the world, but here, and only here, grow representatives of all the major domesticated species within the genus. Some botanists believe that the location for the origin of chile peppers was further east, in Central Bolivia along the Rio Grande. 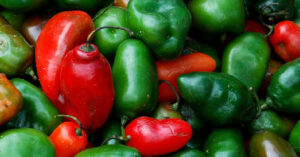 Scientists are not certain about the exact time frame or the method for the spread of both wild and domesticated species from the southern Brazil-Bolivia area, but they suspect that birds were primarily
responsible. The wild chiles (as well as their undomesticated cousin of today, the chiltepin) had erect, red fruits that were quite pungent and were very attractive to various species of birds that ate the whole pods. The seeds of those pods passed through their digestive tracts intact and were deposited on the ground encased in a perfect fertilizer.
In this manner, chiles spread all over South and Central America long before the first Asian peoples crossed the Bering land bridge and settled the Western Hemisphere. The small pods of the undomesticated
species are commonly called “bird peppers” in languages all over the world, and we describe the wild varieties of the domesticated species in the appropriate chapters.
Botanists believe that birds are immune from the capsaicin (pungency) in the pods and that the chemical evolved to protect chile peppers from mammalian predators. Scientists have long speculated that plants produce secondary metabolites, chemicals that are not required for the primary life support of the plant, to fight off predators and perhaps even competing plant species.
Capsaicin in chiles may be such a metabolite. It prevents animals from eating the chiles, so that they can be consumed by fruit-eating birds who specialize in red fruits with small seeds. Mammals perceive
a burning sensation from capsaicin, but birds do not.
Want to know more about chiles? You’ll find it in Peppers of the World and some of Dave’s other fine books here.