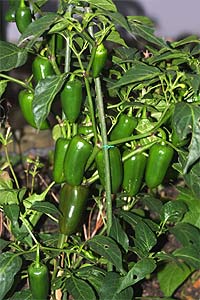 Having transplanted your chile pepper plants into an actual gardenchile pepper plants into an actual garden, it’s time to think about the warmer months ahead. When summer arrives, weeds may try to seize control of the pepper patch. Prevent them at all costs. Weeds not only look ugly, they can harbor pests like leafhoppers, which spread curly top virus to pepper plants (which happened with devastating effect throughout New Mexico in 1995). So keep those hoppers homeless by making the garden weed free.

For gardeners who live in warm zones, the summer sun can be more of a hindrance than a help to getting high yields. Intense sunlight can actually cook peppers (a problem called sunscald) and decrease the yield of usable fruits. If gardening in a high-altitude region with intense sunlight, shade the peppers by covering the plants with shade netting (available at garden centers or by mail-order). Rig up a makeshift frame over the peppers and drape the shade cloth over this frame so it remains easy to tend the peppers under their “tent.” Varieties such as habaneros and rocotos are especially prone to sunscald–and both perform and yield better under the netting than they do in open, unshaded plots.

It’s also a good idea to use supports for high-yield plants like this.

During the hottest days of July and August, pepper plants can lose a lot of water through their leaves. When this occurs, the leaves wilt and the flowers (and sometimes fruit) drop right off the plants. Reduce this water loss by boosting the humidity around the plants with a thick layer of mulch such as dried grass clippings (placed over top of the plastic mulch, if using it).


Once the plants start producing their peppers, there’s another little trick to use to maximize the yields–at least with the pepper varieties that are eaten green, such as jalapeñosjalapeños, serranos serranos and the New Mexican varieties. Increase the total yield of these varieties by continually picking the peppers when they reach their largest “mature green” size, and not waiting for them to fully ripen on the plant. When a pepper plant reaches its “fruit load” (the maximum weight of peppers the plant can support), it will stop flowering and fruiting even though there may be a month or more left in the growing season. Removing the mature green fruits signal the plant to continue flowering and setting fruit throughout the remainder of the season–and the result is more pods per plant.