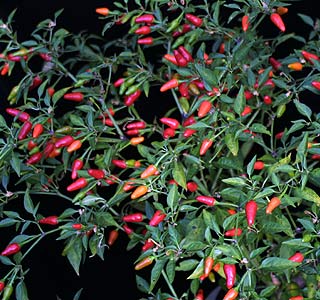 Fruit development is enhanced by increased sunlight. More fruit will set near the top of the plant than within the canopy of leaves. The size and shape of the pod is inherited, but is subject to considerable modification by environmental factors. The size of the pods on the same plant tends to decrease slightly as the growing season progresses. Generally speaking, fruits are ready for picking in their fresh green stage at about 70 days after planting. Fully mature pods may take 130 days or more for some varieties. 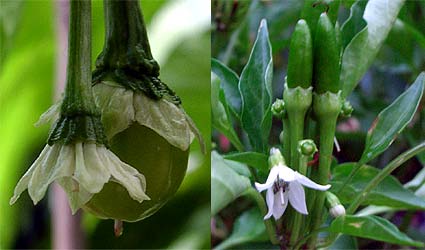 Fruit Load. The maximum weight of fruits that a fruiting plant can bear is known as its fruit load. The fruit load of each pepper plant is dependent on a number of considerations including stem size, amount of foliage, and the extent of the root system. When the plant achieves its fruit load, it ceases flowering. Thus a plant will stop producing fruit even though there may be a month or more left in the growing season.

The pepper gardener can increase the yield of plants by picking pods in their largest immature green form. The plant will not have to bear the weight of the pods removed, will continue flowering and setting fruit throughout the remainder of the season, and the total weight of pods produced by each plant will be greater.

However, the technique of periodic harvesting to increase pod yields only works in long growing seasons or with varieties having very short growing periods. In cooler climates, pepper plants may not reach their fruit load before the first killing frost, so picking pods early will not increase the total yield.

Pungency. Mature pods are more pungent than immature pods. Generally speaking, stressing pepper plants increases their pungency. The restriction of water, or overwatering, will increase the amount of capsaicin in the pods. The pungency is also increased when the fruit ripens at high temperatures rather than cooler ones. In fact, the pods of New Mexican varieties ripening at temperatures between 86 and 95 degrees have twice as much capsaicin as those ripening at 59 to 72 degrees. Nitrogen that is applied after fruit set can lower the capsaicin levels.

Pepper lore holds that the seeds are the hottest part of the pod, but this is not true. Although the seeds do absorb capsaicin during processing, in the fresh pods they are not very pungent at all. The most pungent part of the pod is the placental tissue, or cross wall, which holds the seeds and produces capsaicin. The pepper pod becomes less pungent from the stem end to the apex.

Flavor. Each variety of pepper has its own set of aromatic substances that give it a unique flavor. The important flavor component of bells and jalapeños is 2-isobutyl-3-methoxyprazine. This chemical is the most potent aroma known to humankind and is detectable when diluted to one drop in an olympic-sized swimming pool full of water. Tabasco has twenty-three flavor components rather than a single dominant compound. The habanero has a particular, fruity aroma that is never forgotten. Gardeners should pick fresh pods, cut them open, and smell and taste them to decide which are better for various culinary applications.

Improving the Yield. In addition to the methods described above, pepper gardeners have discovered other ways to produce more pods. One of the most common practices is the removal of flowers and early fruit. Dr. William Clapham, a plant physiologist at the University of Maine, recommends pinching off flowers for several weeks to increase fruit dry weight. He suggests that the pepper plants devote their energy to vegetative growth rather than fruit production, resulting in larger plants that produce more market-sized fruits. In another experiment, plants with all flowers removed as late as mid-July still had good yields.

Howard Watson of Houston, Texas, grows his bell peppers in plastic-wrapped wire cages. He makes wire cages 18 to 20 inches in diameter and about five feet high, and then wraps the bottom half of the cage with 6-millimeter clear polyethylene. Each cage encloses a single pepper plant in the garden until late May, when the cages are removed. As a result, his pepper plants grew seven feet tall and were still producing in mid-December. “By my count,” wrote Watson in National Gardening, “we harvested up to 60 peppers per plant!”

It is ironic that some gardeners use reflective mulches to increase yield while others use shading. Experiments have been conducted to determine the effect of shading on fruit yield in peppers. In the early 1970s, Paul G. Schoch of the National Institute for Agronomic Research in Guadeloupe, French West Indies, grew two groups of bell peppers in black plastic pots under identical conditions. However, one of the groups was shaded under black cloth between 10 a.m. and 4 p.m. each day. The black cloth permitted only 45 percent of the normal solar radiation to reach the leaves. After 60 days of this treatment, when the first flowers appeared, the plants were transplanted into open fields. The results were that the shaded plants had more fruits per plant, a greater mean weight per fruit, and a much great total weight of fruits per plant. The results also suggest that pepper plants transplanted from greenhouses, where the light conditions are lower, will yield more than directly- seeded plants.

Some peppers grow well in shady conditions all year long. Chiltepins are usually found beneath “nurse” trees, especially mesquite, so these chile pepper plants are accustomed to low light conditions. However, we have grown Arizona varieties of chiltepins in full sun in the Southwest with spectacular results. Potted chiltepins should not be grown in full sun or their leaves may yellow and drop.

Shading is also useful for some varieties, namely the chinense and pubescens species in the high, dry altitudes of the Southwest that have high levels of ultraviolet light. During the 1992 growing season, both of these species performed better, and had higher yields under netting than they did in the open, unshaded plots.

During the hottest days of July and August, many pepper plants experience water loss by transpiration, no matter how wet the ground is. The results are wilting, flower drop, and sometimes even fruit drop. Antitranspirants, oil or wax emusions sprayed on leaves to reduce water loss, are available. They do reduce water loss, but they do not increase yield or pod size. The simplest method of fighting transpiration water loss is to increase the humidity around the plants by wetting thick layers of mulch such as grass clippings.