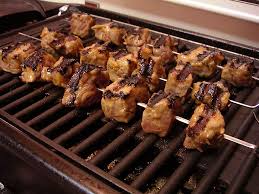 No matter how you spell it—shisk kabob or sis kebabi—this robust specialty features skewered chunks of meat and onions marinated in oil and spices and then grilled over an open flame. The technique apparently originated in the Caucasus and then spread southward to Mediterranean countries. The traditional meat has always been leg of lamb, a meat that seems to be permitted by most major religions. To make a perfect kabob, remove any tough membrane from the meat, cut meat across the grain—and don’t forget that the meat must be marinated before grilling. Serve with a salad of tossed greens, ripe olives, and feta cheese and for dessert, baklava and Turkish coffee.