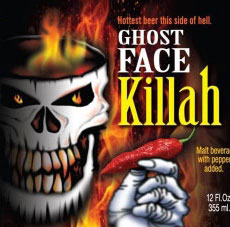 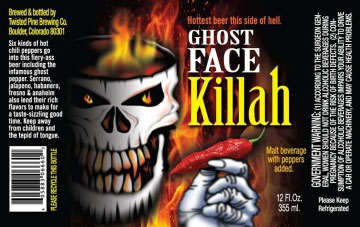 Is Ghost Face Killah beer a refreshing libation, or an abusive relationship? According to reviewers Daniel Quinn and Marc Bayes of NotYourDadsBeer.com, it may be a little of both. This brew is the brainchild (or devil’s spawn, if you will) of Twisted Pine Brewing Company in Boulder, CO. Initially only available in their home state, Twisted Pine is extending distribution of Ghost Face Killah to six additional states this month: Texas, New Mexico, Florida, Nebraska, Missouri and Louisiana.

Featuring the ferocious ‘Bhut Jolokia’ (also known as the Ghost Chile), this American-style wheat ale is blended after fermentation with several other peppers: Anaheim, Fresno, jalapeño, serrano, and Habanero. Of course, these days the ‘Anaheim’ chile has been renamed to ‘New Mexican’ because Anaheim, California is no longer a chile-growing region…but I digress.

Twisted Pine describes the experience of taking a swig of Ghost Face Killah: “The result is liquid fire that makes endorphins rush and foreheads sweat.  The intense heat presents itself immediately and persists for more than a minute after the sip.  Due to the extreme nature of the beer, Ghost Face Killah is sold individually in twelve ounce bottles, as Twisted Pine feels that amount is the perfect dose.”

Owner Bob Baile explains how the idea for creating the world’s spiciest beer was born in response to constant requests from fans of the brewery’s standard chile beer, Billy’s Chilies, for something ‘hotter’.  “Customers kept asking for more heat and we were determined to oblige them.” Twisted Pine has been brewing craft beer since 1995. Cooks at Twisted Pine’s Ale House in Boulder have been finding creative ways to incorporate the piquant ale into the dishes they serve.  On the premises at the brewery, Ghost Face Killah’s distinctive flavor can be found in salsas, soups, and chili.

If you’re really into beer, and can handle the heat, Ghost Face Killah is definitely worth a try. It’s probably a good idea to have some ice cream nearby when you do. Check out this video review of Ghost Face Killah by Quinn and Bayes, and visit the Not Your Dads Beer site for more craft beer reviews, videos, and blogging. Am I going to try it myself? Hell no.