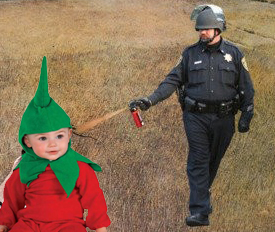 By “case” I mean the Occupy-esque protest that took place near the end of last year in Albuquerque. Attendees weren’t going off about the evils of the financial industry, though. No, this was something closer to home—genetic research. Specifically, as it applies to chile peppers.

The LA Times ran a brief piece on the story on December 5th. According to them, researchers at New Mexico State University were studying pepper genetics. Somewhere, someone got the idea that this automatically meant genetically modified super peppers were just around the corner; that Corporate America couldn’t wait to swoop in and destroy small growers in the state by planting taller growing, sturdier chile plants. Events snowballed from there until people had enough fire in the belly to protest.

Now, I wasn’t at the protests. I was too busy celebrating my birthday in Los Angeles that weekend and didn’t find out about it until after Lois Manno wired my bail to the county sheriff.

That’s not important right now, though. What is are your thoughts on the matter. Do you think we’ll be seeing GMO (genetically modified organism) chile peppers soon, and if so, what impact do you think they’ll have?