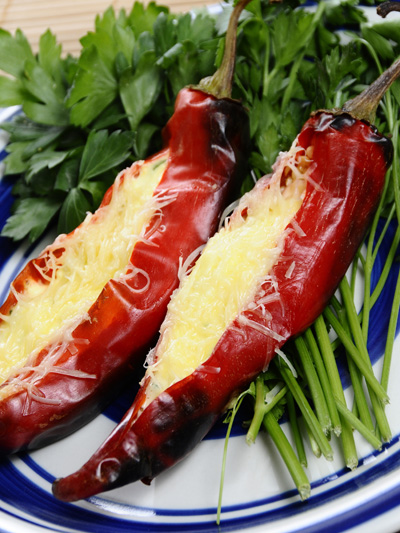 Piperies Gemistes me Feta may be Greek to you and me, but to a Greek, it means “Greek Peppers Stuffed with Feta.” A photo of these peppers was part of the Burn! Magazine display at last weekend’s National Fiery Foods & BBQ Show, and several people said they wanted to learn how to make that dish. So here’s the recipe…you can find this and many other recipes for stuffed peppers from around the world in the April issue of Burn!

Because they’re broiled, not battered and fried, these stuffed peppers are somewhat healthier than traditional chiles rellenos. 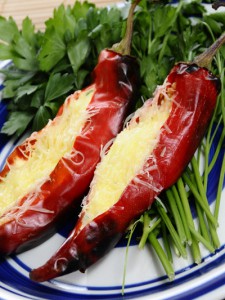 Arrange a rack 6 inches from the broiler element and set your oven to broil. Put the peppers on a baking sheet and broil, turning once, until just soft, about 5 minutes. Transfer peppers to a rack and let cool.

In a large bowl, use a hand mixer to whip the feta, oil, yogurt, parsley, zest, oregano, and egg yolks; season with salt and pepper. Make a lengthwise cut from the stem to the tip of each pepper and stuff each pepper with some of the feta filling; transfer to an aluminum foil-lined baking sheet and chill for 30 minutes in the refrigerator.  Sprinkle the peppers with grated Parmesan cheese and broil them until cheese is golden brown and bubbly, about 6 minutes. Transfer the peppers to a platter and serve hot.