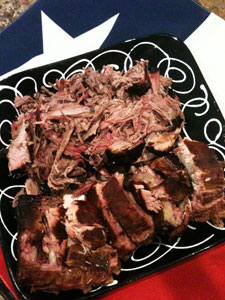 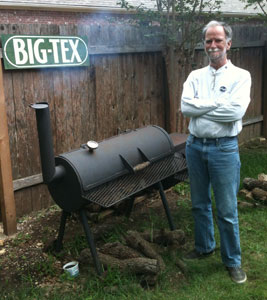 Can you guess which one's the Bad Boy? (Hint...Ken's the one on the right).

When I say butts were kicked on Mother’s Day in Texas, I’m talking about pork butts…which, as everyone knows, are actually from the hog’s shoulder. Somebody in butcher school missed out on a basic anatomy course, I guess.

Anyway, I was lucky to be a dinner guest with Sheri Taylor and Ken Scholz in Austin. When I heard that Ken was going to fire up the Bad Boy, I knew there was no better place to be for BBQ. Bad Boy, you see, is a smoker of legendary reputation. Bad Boy was “adopted” by my brother Dan back around 1996. He was given the smoker by a guy who was selling his house and had plans to have the beast hauled away for scrap. Why he didn’t want the custom-built smoker remains a mystery. 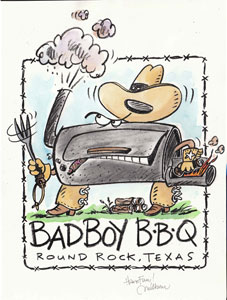 This cartoon was made by artist Milburn Taylor to commemorate the first firing up of Bad Boy post-restoration.

After being restored by Dan and Ken, Bad Boy now resides in Ken’s back yard in Round Rock, and Ken has become the official King of ‘Que in our family. It’s unlikely that Bad Boy will be moving any time soon…weighing in around 400 pounds, it’s built from 1/4″ cast iron oil field casing pipe…I can barely lift the cook lid with two hands. Built in the classic offset design, the smoker measures 52″high from ground to top of the stack, and has a 40″ long cooking drum that’s 16″ wide. The fire box is 20″ long and 16″ wide. The top of the firebox has a flat lid, so there’s a surface to cook side dishes and such. There’s a deflector panel welded where the firebox connects to the cooking drum, to prevent flames from touching the meat—we’re talking all indirect, all the time.

Ken keeps the Bad Boy fed with live oak (also called “post oak”) during the smoking, and maintains a temperature between 325 and 350 degrees F. This is slightly more than the “low and slow” kind of smoking, but the upside is that Ken’s cooking time is less. It typically takes about 6.5 hours to smoke a pork butt in the Bad Boy (3 hours open to the heat, and 3.5 hours sealed in foil). And believe me, there’s no issue with dryness. 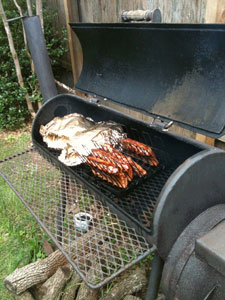 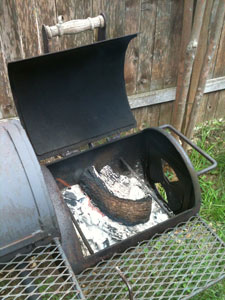 The Mother’s Day meat selection included 3 pork butts, several racks of baby back ribs, and a few packages of Elgin Hot Guts Sausage from the Southside Market in Elgin. The Market has been making BBQ since 1882, and many consider it one of the all-time best places in Texas for ‘Que. I tried to sweet-talk Ken into sharing his rub blend, but he would only give ingredients, not proportions. He called it a “typical Texas BBQ rub” and it consisted of salt, paprika, garlic powder, onion powder, and roasted garlic powder. Black pepper and/or cayenne can be added to taste. However, he did admit to using the following BBQ sauce recipe from celebrity chef Steven Raichlen. Check out Steven’s Barbecue Bible website.

Perfect pork...pulled at top, ribs at the bottom.

We toasted Ken and Bad Boy, then proceeded to stuff ourselves with pork in three different configurations. I think my favorite were the ribs, though everything was good. The bark on the pork butts was perfect, and you couldn’t ask for better flavor. I wish I could share a bite with everybody reading this, but you’ll have to use your imagination. Try the BBQ sauce, though…it was fantastic! I told Ken if he ever decided to quit his day job, he’d do really well on the competition BBQ circuit. Who knows…maybe one day Bad Boy will hit the highway!


1. Combine the ketchup, brown sugar, lemon juice and zest, molasses, Worcestershire sauce, liquid smoke, mustard, onion powder, and pepper in a nonreactive saucepan and whisk to mix. Let the sauce gradually come to a simmer over medium heat and simmer until thick and flavorful, 8 to 10 minutes.