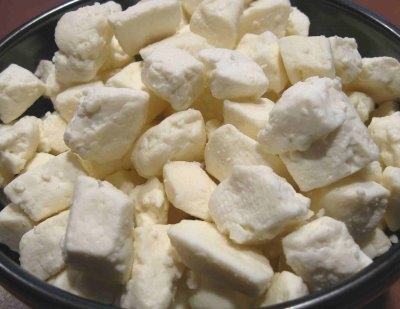 After the National Fiery Foods & BBQ Show, I always end up with fantastic products that I just can’t resist bringing home, even though an entire cabinet of my kitchen is dedicated to spicy condiments of all types. Sometimes the product isn’t something you’d really expect to find at a spicy food event, but that’s the wonder of this great show—you never know what you’re going to find there. For instance, I acquired a bag of cheddar cheese curds courtesy of the Old Windmill Dairy from Estancia, New Mexico. Old Windmill is best known for its goat cheese, but they dabble in cow’s milk products too. If you don’t know the difference between curds and cheddar cheese, the simple answer is “about 6 months.” Cheese curds are the product of processing milk until it separates into whey (the liquid part) and curds (the semi-solid material that goes on to become most cheese).

Cheese curds...not much to look at, but tasty!

Today I decided to try making a plate of nachos using the cheddar curds, so I crumbled the cheesy nuggets over some tortilla chips, and spooned on some refried black beans, then some awesome fresh-packed salsa from Garden Fresh Salsa. If you’ve never tried Garden Fresh products, they are truly amazing. According to their website, it’s the number one most award-winning fresh salsa in North America, and I 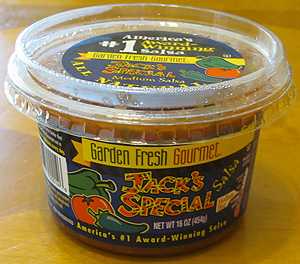 believe it. The flavor and texture is as good as freshly homemade.

I took my plate full of slathered chips and nuked away. Two minutes later, I had nachos covered with lovely, creamy melted curds. The texture was slightly stringy, like good mozzarella, but the flavor was tangy, as curds contain more acidity than, say, cottage cheese (which also contains curds). According to several Wisconsin-based websites dedicated to cheddar curds, they supposedly squeak when you bite into them; however, I didn’t hear any distress calls from my batch of curds. Perhaps New Mexican cheese curds are mute, or simply more resigned to their fate than Wisconsin curds. 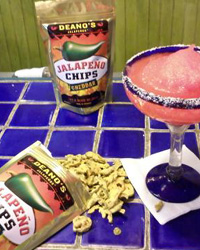 The crowning touch for the nachos was a topping of Deano’s Jalapeños, made in Stowe, Vermont. The perfect alternative to sour, soggy pickled jalapeño slices from a jar, Deano’s slices fresh jalapeño peppers, then flash fries them to crunchy perfection. The pepper slices are then dusted with a touch of cheese powder…heaven! The only way they could be better would be if they were coated in chocolate. Hey Deano, perhaps you’ll consider adding that as the next product in your line?

Long story short, the nachos were great, and I look forward to more experiments with cheese curds and the rest of my Fiery Foods Show treasure trove. You can find more great products in Burn! Magazine. Go here to read the first issue free!