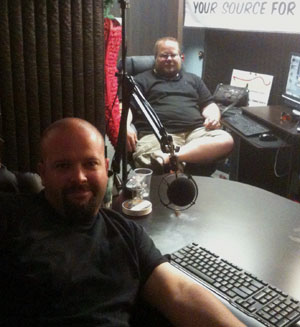 James and David in the Eat More Heat mancave.

I recently visited the Houston, TX studio of Eat More Heat, where ultra chilehead James Wreck and his trusty sidekick David Martin produce a weekly live video program focusing on spicy product reviews, with a generous helping of irreverent humor. You can tune into the fun Tuesday nights at 9pm Eastern, 6pm Pacific. Hosting a live broadcast, appearing on TV shows like Hairy Bikers, and traveling the country participating in fiery foods-related events isn’t enough to keep James Wreck busy, so he’s expanding into the retail market in a big way, opening the first of what he intends to be a series of hot shops in Houston called iBurn. There will be an e-commerce site by the same name, and it’s all going to launch in time for the Houston Hot Sauce Festival, September 15-16.

Here’s an excerpt from our bull session, in which we discussed hot shops, evil giant corporations, myths about superhot products, and more. This is Part 1 of a series from that interview. Thanks to James and David for sharing their take on the future of hot shops, and their plans for iBurn!

LM What made you decide you wanted to go in the direction of a hot shop? I’ve seen over the last few years some attrition in brick and mortar hot shops. Do you feel the economy is improving enough that you can take this risk and it’s going to pay off?

JW Starting in financial planning, I’ve always been a value-added investor. We can get into a down market where the profit potential is there. You can see as we’re prospecting retail space, everybody is looking to find the potential for growth. In a down market, if you can be a catalyst for growth, everyone involved will ride on your coattails, so to speak. We’re in a market of almost 6 million people here in Houston, and there’s really only one business that does anything similar to what we’re going to be doing.

JW Yeah. We’re in a position where we have the distribution channels in place and we’re ready to go. There’s competition from some of the grocery stores and specialty stores in town, but none of them are doing it right. They may have the proper brands, but even the ones with more successful independent manufacturers, they’re not carrying the right products in the line. They’re stocking their shelves with stuff that won’t guarantee repeat customers. It puts us in a great position, because everyone is focusing on major brands. We’re going to be the only game in town that’s doing it right. 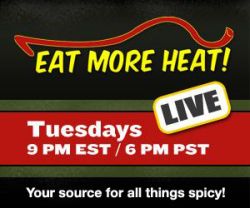 LM You’ll be able to draw from all the product knowledge that you acquire from the reviews you do on the Eat More Heat show. So you can really speak about what products do what, and choose what you’re going to carry based on hands-on experience.

JW Exactly. Initially I’ll probably be sitting at the register myself in the near future, because when people walk through the door I want to be able to identify their heat tolerance, because that’s so important.

LM So you’re going to give that one-to-one customer service?

JW Yeah. When somebody tells me, “I’ve never eaten anything hotter than a jalapeño,” I’ll ask them “what do you want to put your jalapeño sauce on? Here are your options.” We’re going to set up the whole store so it’s try before you buy. You won’t have to just hope that I’ve picked the right sauce for you. You’ll be able to sample everything and know you’re walking out with the right sauce for what you want to do.

LM So you’re not creating a store for only the ultra-hot people who want to eat nuclear fire? You’re going to have a store anybody can go to and find something they love.

JW Obviously we’re going to cater to the ultra chilehead. We’ll have ‘Bhut Jolokia’ stuff, and ‘Trinidad Scorpion’, we’ll have stuff that’ll put you into shock and get the endorphin rush going.

LM If that’s really where you want to go.

JW But if we want to maximize potential for this marketplace, we can’t scare off the average consumer. That’s why we will be organizing it using the same heat rating scale that we use for the website. So we’ll have mild, medium, mean, madness, and meltdown.

LM David, what will be your involvement in the store?

DM We’ll evaluate every product that comes in the door. It’ll get custom in-house photography, we’re going to sample and rate it, do our own interpretive description of it, so everybody can get a very clear idea of what they’re purchasing. We see time and time again, particularly in the heat category, that manufacturers misrepresent their products.

LM It’s very subjective, and unless you get consistency in who’s making the evaluations, it’s going to be all over the board.

DM And it may be the manufacturer is saying this is the hottest thing they make, but in the wide spectrum of the entire hot sauce and spicy foods industry, it’s just not an accurate descriptor.

LM They might know their product, but they don’t really have the broad scope of where it’s going to fit into the big picture like you guys do.

JW David’s real niche within our concept is finding both Houston- and Texas-based small businesses with products we can stock. We’re going to have a section dedicated just to local products.

LM It can be overwhelming, trying to navigate through all these products you find online. That’s why it will be great to be able to rely on you guys to take the time to try all this stuff.

JW The biggest thing we’re going to focus on when we evaluate these products is food pairings. What you have to realize is the manufacturer will say that this goes great with chicken or fish or beef. But realistically, that’s far too optimistic. It’s not going to work. We want to identify accurate food pairings for a product, and not just going into the total chefy, culinary thing like, “this will be perfect in a tapenade.” We want to say, “this will go great on wings, you can throw this on your burger, your dog, whatever and keep it simple, for people who are not contemporary gastronomes—we call them fooshbags.

LM The question is, “how do we use this product on regular food?”

JW Exactly. When someone comes in who says, “I like habanero heat and I’m looking for something that I can drown my jambalaya in,” we can give them something that’s ultra hot that’s going to go great with Cajun food. I can name one right off the top of my head, BooDreaux’s Cajun Rocket Fuel. It’s a perfect Cajun-style habanero sauce.

LM Are you going to carry things like sweet heat, pickles and snacks?

JW Absolutely. For example, Houston has no idea what Deano’s Jalapeños are.

LM That’s a travesty right there.

JW Yeah, I know. We’ll be the only retailer in the city carrying them. When people get a taste of these things, we probably won’t be able to keep them on the shelves. The beauty of it is, we’re opening up the city to so many unique small artisan products, I expect word of mouth to be insane. We’ll build from the chileheads and it’ll spread from there.

LM You have an e-commerce site that’s going to launch as well, and the goal is for both to be up and running in time for the Houston Hot Sauce Festival, right?

JW That’s what we’re shooting for.

JW When the idea came up two months ago, it wasn’t quite as ambitious, but we’ve had a few small setbacks and now it’s turned into a very ambitious plan. But I love pressure. I don’t know if there’s another hot sauce shop in the U.S. that’s going to be doing what we’ll be doing. We want to turn this into a personalized shopping experience for every single person that comes in here, and help them open up a whole new world. Not only that, but make them a part of the whole chilehead culture.

LM It sounds like you’re of the opinion that there’s going to be a Renaissance in brick & mortar hot shops?

Watch the episode of Hairy Bikers where James lights up some biker ass! That part of the show starts at 11:30 in the counter: