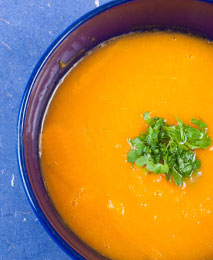 The onset of cool fall weather, lengthening nights, and big orange squash everywhere just puts me in the mood for pumpkin soup. The recipe I want to share with you is based on a sweet potato/chorizo soup recipe from chef Jamie Oliver, which I modified to feature pumpkin. And boy, did it ever work!

My first task was to roast and peel the 4-pound pumpkin that I picked up at the grocery store. These are sometimes called Sugar Baby pumpkins, and are ideal for pies (or soup). They’re more moist and less woody than the large carving pumpkins. The most difficult part of the pumpkin roasting operation is cutting the thing in half lengthwise. You need a large, sharp knife to get through that tough skin. After scooping out the seeds (which you save for roasting separately after washing off the stringy goop surrounding them), rub the entire surface of each half with olive oil, apply salt and pepper generously to the insides, and bake the halves on a cookie sheet in a 375-degree F. oven for about an hour and a half. When you can easily push a fork into the pumpkin, it’s done.

I roasted the pumpkin the night before and threw the halves into the fridge for processing the next day. You can also do this the same day you make the soup, but allow for enough time that the pumpkin can cool a bit before you attempt to peel it. Once it’s cool, peel away the outer skin and cut the pumpkin into 1-inch chunks.

Since I was roasting the squash anyway, I also roasted the two large carrots to help carmelize and sweeten them. After peeling, I prepped them with olive oil and salt/pepper the same way I did the pumpkin. They took less time to soften, so when you roast the carrots, keep an eye on them so they don’t burn.

Now for the soup-making part: