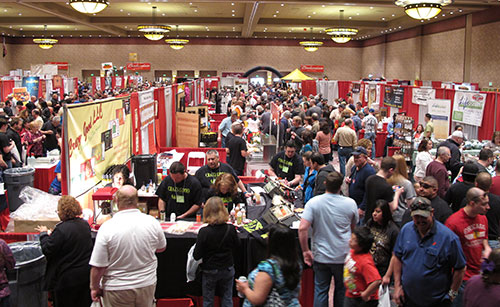 Lusty Monk. The Puckerbutt Pepper Company. Frog Bone Cajun Sauces. For twenty-five years the National Fiery Foods & BBQ Show has been THE place to be if you are a chilehead or a BBQ fiend looking for the newest spicy fix. Not to mention that it’s the best people-watching ever! Hulking guys covered with tats, their shaved pates dappled with sweat, grin and pant over the superhot sauce that just kicked their ass. The chileheads were out in force this year—a gate count of 20,500 folks going through the three-day show smashed all previous attendance records. And first in line on Saturday…like he has been for the last fifteen years…is Donald Beard of Albuquerque, sporting a Holy Jolokia shirt and his signature black cowboy hat. He arrived at Sandia Resort and Casino at 6 am to snag his spot, though the show didn’t open to the public until 11 am. We made sure Donald got into the show right away with an honorary trade attendee pass. That kind of loyalty and enthusiasm deserves to be rewarded!

The demographic is broad and diverse. Old grizzled vets wearing ball caps emblazoned with military insignia wander by, hip young parents tote the next generation of foodies in baby carriers, Latina babes wearing impressively high heels and impossibly tight pants hang on the arms of their boyfriends while sucking on ice cream bars. The ice cream is given out free at the 94 Rock radio booth. It’s a critical cool-down antidote to the hottest sauces. In fact, there may even be more people eating ice cream than drinking beer, though it’s close. 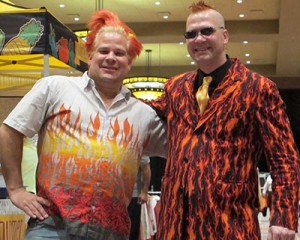 Flaming outfits were a popular look this year! Flaming Joe and Sam of Zane and Zack’s strut their style.

The exhibitors are nearly as interesting to watch as the general public. Sam McCanless, the owner of Zane and Zack’s World Famous Honey Co., sports a tangerine Mohawk and wears a tuxedo emblazoned with yellow flames; last year two busty exhibitors were forced to cover up their prominently-displayed assets because other exhibitors were offended. But usually everyone plays nicely together, and a good time is had by all. I’ve never seen a drunken brawl break out, though God knows there are folks in the crowd who look very capable of it. Rather, the Fiery Foods Show is sort of a peaceable kingdom where food-lovers of all stripes come together, united by their common love of chile peppers. 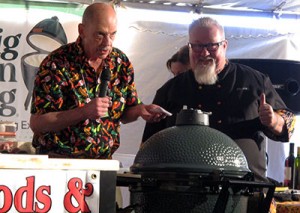 Show producers Dave DeWitt, Mary Jane Wilan, and Emily DeWitt-Cisneros pulled out all the stops this year for the show’s quarter-century anniversary. Throughout the general public hours (mornings are reserved for the trade only), an outdoor tent was ground zero for frequent cooking demonstrations and tastings of everything from spicy chocolate sauces to tequilas. A high point of the show was The Great Grill-Off, which pitted outdoor cooks against one another in contests of grilling skill. The guest chefs were given an assortment of mystery ingredients and one hour to cook a dish that would knock the socks off a panel of judges. After two elimination rounds, the final challenge was between chef/media personality/author Ray “Dr. BBQ” Lampe and pitmaster Bill Milroy of the Texas Rib Rangers. While Lampe ultimately won The Great Grill-Off, Milroy made a very strong showing. 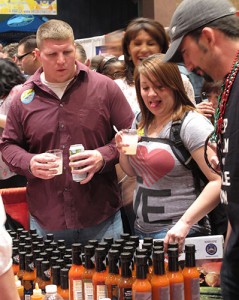 Show-goers got their fill of fire, flavor, and fun.

Nevin Montano of the Albuquerque-based Disc-It company once again thrilled show-goers with steaming hot grub mixed up in his fantastic gas-powered outdoor woks. These cookers are a blend of clever design, convenience and art. The legs of each unit are cut from steel in patterns that portray animals, sports logos, chile peppers—whatever the buyer might want. He designed a special Disc-It to celebrate the 25th anniversary of the Fiery Foods Show and a drawing was held during the show.

Sunbelt Media (the publishing division of Sunbelt Shows) had a booth at the show, in which we sold the brand-new poster featuring The Hottest Peppers in the Universe. A line of books by Dave DeWitt was prominently displayed, including what proved to be our top seller at the show: Dave’s newest book, Growing Medical Marijuana Securely and Legally. That’s right—a book that has absolutely nothing to do with chile peppers created a huge buzz (no pun intended) among attendees. Dozens of people asked whether we were giving out free samples. Our answer? Buy the book and you can grow your own samples! 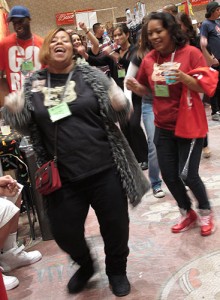 Folks were dancing in the aisles at this year’s show!

As always, there was a fantastic collection of delicious and outrageous sauces, salsas, rubs, beverages, and snacks featuring the pungent pod. Many of our long-standing exhibitors like Garden Fresh Salsa, Danny Cash, and CaJohns were there, and several brand-new exhibitors made their debut, like The Zesty Moose and Horsetooth Hot Sauce. To add to the fun, there were cooking gadgets like the natural lava cooking stones offered by Island Grillstone, and a completely new product developed by chemist Marlin Bensinger of Chromtec: Pepper Burn Anodyne, a topical lotion that neutralizes the burning sensation caused by chile peppers on the skin. No doubt a few of our show attendees wished they could gargle with Marlin’s product to cool the heat from some of those bhut jolokia sauces.

We’re already making plans for next year’s Fiery Foods & BBQ show. It’ll be tough to top this year, but we’ll do our best to keep upping the ante with more cooking demos, celebrity chefs, and Scovie-winning products. Anyone who goes to the show will see that the true secret ingredient that makes it the weirdest, hottest place in New Mexico every March is provided by our exhibitors and the public. We couldn’t do it without you!