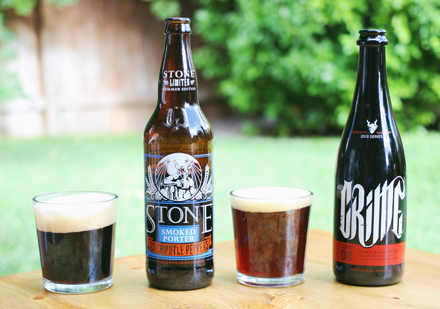 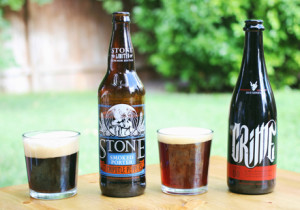 I suppose there will be a day when I run out of hot and spicy alcohol to sip on, but we’re not there yet. On a trip to my local brick-and-mortar liquor store here in Albuquerque, I found several that I hadn’t tried yet, but since this has been a big beer-drinking summer for me, I grabbed some spicy beer to try out.

The two I picked up are both special brews by Stone Brewing. After nearly 20 years microbrewing beer in Escondido, California, Stone has built both a reputation and a very loyal following in the beer-loving community. Many of Stone’s offerings come in the special large-serve bottles, as did the two I picked: Stone Smoke Porter with Chipotle Peppers and CRIME, Stone’s Lukcy Basartd Ale with peppers and aged in bourbon barrels. 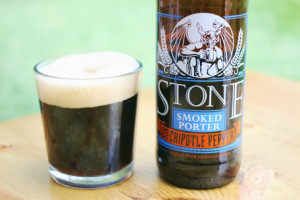 Stone’s Porter, the regular non-chipotle type, is a chocolaty/coffee/cream taste with a touch of bitterness, like a high cacao dark chocolate. The addition of the chipotles make this a smoky/sweet beer with lots of complexity that vaguely reminded me of a chile and dark chocolate bar.

Those of us that tasted the Porter with Chipotle said it would be a great pairing with burgers or barbeque. The 22 oz bottles run about $8. 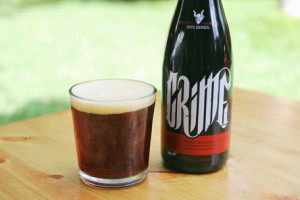 Stone’s CRIME was a companion beer to PUNISHMENT, a series of two limited edition beers from Stone, both with varying amounts of pepper and bitterness, and both with different underlying beer bases.

CRIME has more of the “bitey” peppers than the porter, which Stone outlines on their website: red and green jalapeños, black nagas, Caribbean red hots, Moruga scorpions and fatalis. I actually read that list after trying the beer, and it sounds worse than it really is. Don’t misunderstand me here, CRIME is extremely hot, but not to the point of pain. It burns as you drink it, especially as you swallow it, but a sip of water afterwards will leave you feeling fine.

While CRIME is hot, tasters eventually just settled on “it doesn’t taste good” as the final vote. They felt the Porter with Chipotle has a place as a drink, especially with specific food pairing, but that CRIME was probably doomed to be a meat marinade or a dare drink. A 500 ml bottle (just over a pint) of CRIME runs $13.

My introduction to peppers in beer was a good start, really confirming what I’d already discovered with liquor: some peppers don’t really fit in a drink, while others, used sparingly, can make a fun alternative flavor to your cold brew.

Greg Mays is the managing editor of Simple Cocktails at www.simple-cocktails.com.