Super hots really blew the ceiling off of what was possible for a hot, spicy guacamole. Be that as it may, habanero chiles pack just the right amount of extra burn without overpowering the rest of this killer guacamole we ran on Central in the article, Avocado Madness!
Named from ahuacatl “testicle” and mole, meaning “mixture,” this pulpy sauce moved from strictly Mexican use into America around 1900 and slowly increased in popularity as the avocado became more available in American supermarkets. It really took off after the introduction of corn chips in the 1960s and now is found pre-made in various packages everywhere, but many of them are bland and lack the full flavor of guacamole made from scratch.
Not this one. This version is traditionally made with a molcajete y mano, a large Mexican mortar and pestle carved from volcanic rock. Not all of us have volcanoes lying around the neighborhood and for those unfortunates, they can smash the avocados with a fork or potato masher. 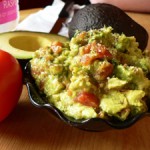