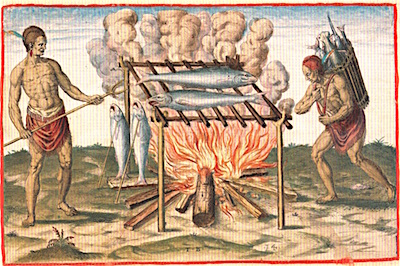 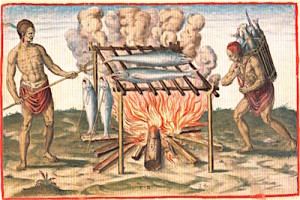 Here is a solid—if short—attempt to summarize what was known about outdoor cooking around the world in 1878. This is an early example of food history writing that resonates with me because the author is comparing and contrasting cooking styles from around the world. Tylor is actually debunking claims that Americans invented barbecue. Here’s a sample:

The Canary Islanders buried meat in a hole in the ground, and lighted a fire over it; and a similar practice is still sometimes found in the island of Sardinia, while among the Beduins, and in places in North and South America, the process comes even closer to that used in the South Seas. It is this wide diffusion of the art which makes it somewhat doubtful whether Klemm is right in considering its occurrence in Australia as one of the results of intercourse with more civilized islands. The natives cook in underground ovens on very distant parts of the coast; sometimes hot stones are used, and sometimes not. The complete article is here.