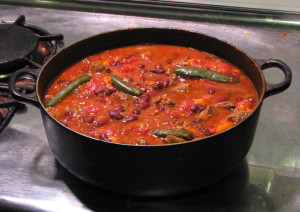 What strange ingredients lurk in this pot of chili?

Everyone has an opinion about chili. Arguably, it is the most contentious food in the world, triggering debates as to its origin, authenticity, preparation, and influence on international culinary practices. While researching chili for this exclusive report, I found a treasure trove of controversial opinions and observations. It is my pleasure to share them with readers with a literary bent–or those who are just bent, period.

“There are fiends incarnate, mostly Texans, who put chopped celery in their chili, and the Dallas journalist, Frank X. Tolbert, who has been touted as the Glorious State’s leading authority on chili, throws in corn meal. Heaven help us one and all! You might as well throw in some puffed rice, or a handful of shredded alfalfa, or a few Maraschino cherries.” –H. Allen Smith

“One man’s chili is another man’s axle grease. If a guy wants to toss in an armadillo, I don’t argue with him–I just don’t eat with him.” –Carroll Shelby, co-founder of CASI