How often have you looked at some bug or other on your pepper plants wondering if it’s friend or foe? Much like a strange rash or growth after a wild trip to Las Vegas, your first reaction might be, “What the hell is that?” While we can’t help you with that mystery STD you may have contracted, here’s a quick look at the little pests that may be plaguing your beloved pepper plants. 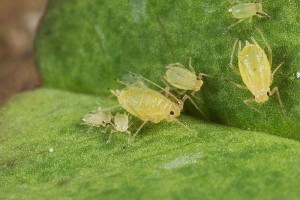 Insects are not usually a severe problem for peppers, but gardeners should watch for several that may appear. The insects most common to pepper plants are cutworms, aphids, pepper weevils, maggots, fleas beetles, hornworms, and leafminers. Early in the season, cutworms are the most damaging pests to both seeded and transplanted peppers. Seeded peppers are also subject to attack by flea beetles when the cotyledons emerge. Green peach aphids can become numerous at any time, but are probably more prevalent during the summer.
Besides the stress created by aphids feeding on plant sap, their honeydew gets on the fruit and leaves. Its presence on the leaves, if heavy enough, can decrease photosynthesis from sooty mold growth. Occasionally, loopers will feed on the foliage, exposing the pods to sunscald. Fall and beet armyworms, yellow-striped armyworms, and variegated cutworms may feed on pods. The beet armyworm will also feed on the foliage. The corn earworm feeds on pods and causes the pods to drop or become unmarketable. Problem insects differ in each region. To control the insect population, and keep seedlings insect-free, inspect the plants daily, weed well around the peppers, dispose of diseased plants immediately, and use insecticide if necessary.
Slight differences in preference may exist by the insects in the garden. For example, the Colorado potato beetle will feed on pepper, but it generally prefers the other Solanaceous vegetables, particularly potatoes and eggplants.