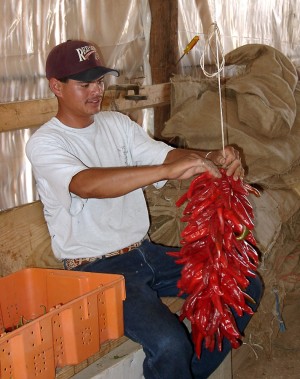 The long red ristras (strings) of New Mexican chiles are seen everywhere in that state in the early fall. They provide decoration, but are also the centuries-old method of drying long red peppers for later culinary use. To make a ristra, a supply of freshly picked, red (or just turning red) New Mexican chile pods is necessary; three-fourths of a bushel of chile will make a ristra about three feet long. Don’t bother using green chiles with the belief they will turn red. Many will be immature pods that will shrivel and turn a dull white. Ristras and wreaths can be made out of any elongated pods, so try making them with Cayennes or Mirasols. 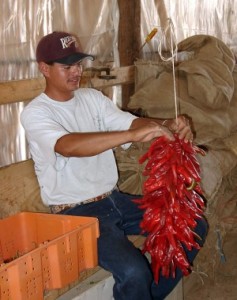 Besides the pepper pods, a ball of lightweight cotton string and some baling wire or heavy twine is needed. The first step is to tie clusters of three pods together with the cotton string. Hold the three pods by their stems, wrap the string around the stems twice, bring the string upwards between two of the pods, and pull tight. Then make a half-hitch with the string, place it over the stems, and pull tight. Continue this process with sets of three pods until there are several clusters of pods tied to the cotton string, or until the weight of the pods makes the string difficult to handle. At that point break the string and start again, continuing until all of the pods have been tied into clusters of three.
The next step is to attach the clusters of pods to a stronger length of twine or wire. Suspend the twine or wire from a rafter or the top of a door and make a loop at the end to keep chiles from slipping off the end. Starting from the bottom, braid the pods around the twine in a manner similar to braiding hair. The twine serves as one strand and two pods in the cluster serve as the other two strands. As the pods are braided, keep the center pushed down to insure a tight fit, and be sure that the pods protrude evenly from the ristra. These days, some ristra-makers have resorted to using rubber bands to “tie” up the groups of three chiles, then slipping each group over a wire to form the ristra. This method is considerably faster than the traditional method; the downside is that the ristras tend to be a bit thin or skinny and last only as long as the rubber bands hold out.
One final method to make a ristra is to use a large needle threaded with string. Push the needle through the bottom of the stem where it widens out, pushing the chiles up tightly against each other. Again this tends to produce thin looking ristras, but this can be overcome by hanging several strings together. It is also a handy way to handle smaller chiles such as cayennes or piquins, which require a lot of time and dexterity to string in the traditional way.
To make a wreath, use smaller pods, such as cayennes and braid the pods around a straightened-out coat hanger and then bend the wire into a circle. When the braiding is completed, hang the ristra or wreath in full sun from a clothesline or rafter where there is good air circulation. The chiles should dry in the sun before the ristra is brought inside or else they may turn moldy and rot. Do not spray the ristra with lacquer to make it shiny–all that will do is make the peppers inedible. Dry red peppers have their own natural luster and do not need an artificial shine.
We’ve got you covered for drying, smoking, and making powders from all your chile peppers here.