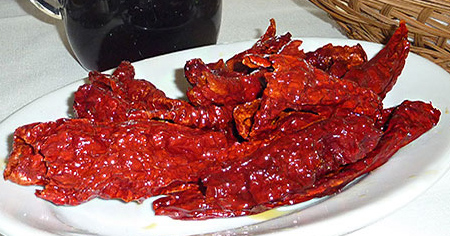 If you are not just looking for the hottest peppers, you’ll find a flavorful specialty at the other end of the Scoville scale in southern Italy: Peperoni Cruschi (pronounced crusskee, which means crispy or crunchy). 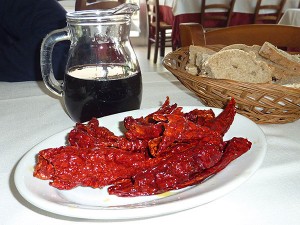 Peperoni Cruschi as a crispy appetizer

The Basilicata region takes pride in a pepper specialty called Peperoni di Senise. Since 1996, it has even enjoyed EU territorial protection, just like Roquefort Cheese, Champagne and various wines. In order to be allowed to bear their name, Peperoni di Senise must be grown in a handful of municipalities in the provinces of Matera and Potenza, and this according to precisely defined rules. They owe their name to the town of Senise on the slope of a hill in the Sinni river valley. 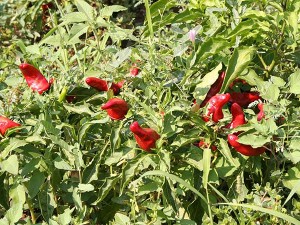 At harvest time, starting in August, the red fruits shine from the fields. In the past they were used to be dried and ground to powder, to enrich the rather poor dishes with color and flavor. Because the color of the powder is reminiscent of saffron, there it is also called zafaran. Even today, it is used to refine risotto, for example. We tasted the mild powder, and it is very flavorful indeed.
The most popular use, however, is Peperoni Cruschi (pronounced “kruski”), crispy, or crunchy peppers. For this, the sun-dried mildly sweet fruits are briefly fried in olive oil, which makes them even more crispy and flavorful than they are anyway. Then you simply nibble them as an antipasto (appetizer) or use them as an ingredient in typical regional dishes, for example “Baccalà alla Lucana” (Codfish Lucanese style), or various pasta dishes. 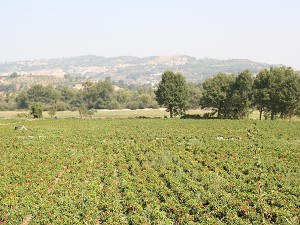 After harvesting, the bright red peppers are pre-dried for a few days in the dark and with good ventilation. Using needle and twine, they are then tied into ristras (called treccia in Italy). Next they are hung under the roofs of special drying houses, but they can also be found on many private balconies from August to September. 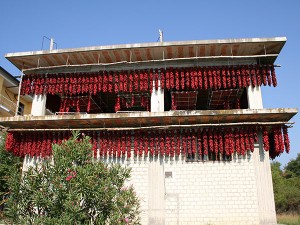 While exploring the region, we stayed in the modern but family-friendly Hotel Villa del Lago just outside Senise, which also has a fine restaurant. When asked about the region’s famous peppers, we were given a tasting plate with the two common preparation methods: fresh and braised, as well as dried and briefly fried crispy. Both were delicious! 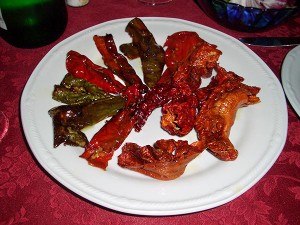 But also further south, crispy-fried sweet peppers are a popular snack and antipasto. In Calabria they are called “Pipi Cruschi” and are made from Dolce Calabrese. (Pipi is Calabrian dialect for peppers; the hot ones are called pipi Infernale).
Like to know more? We’ll have the second part of Harald’s adventure posted later today.–Editor