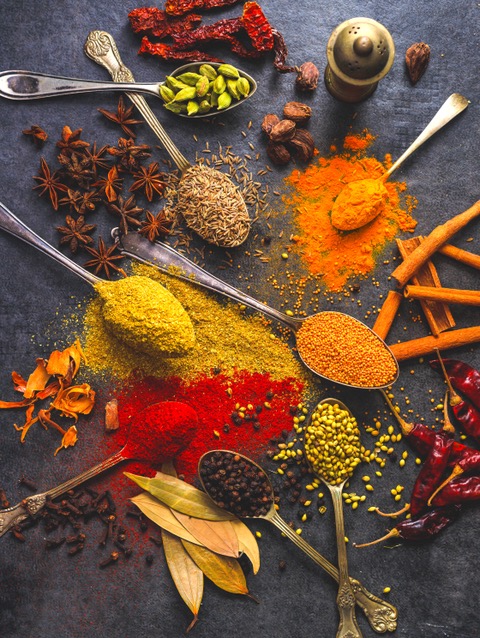 I assume that Douglas’s tongue was firmly planted in his cheek when he wrote the above assessment, but his comment hints at a wide range of opinion about curry, from those people who believe, like cookbook author Manju Shivraj Singh, that “The tongue becomes a slave to the flavor of curry — it is an addiction,” to critics who view curry as an insipid yellow powder that is turned into a floury yellow cream sauce.

The never-ending arguments about curry begin with its origin.

One of the most intriguing theories about the ancestry of curry was advanced by Captain Basil Hall, a traveler in India, Ceylon, and Borneo. “It will surprise most people — old Indians inclusive — ,” he wrote in 1930, “to learn that the dish we call curry is not of India, nor, indeed, of Asiatic origin at all. There is reason to believe that curries were first introduced into India by the Portuguese.” Hall reasoned that since the Portuguese had introduced chile peppers into India, and since hot peppers are a primary ingredient of curry, ergo they must have introduced curries as well.

Hall was dead wrong, of course. Curry-like spice mixtures date back to at least 2500 B.C. In excavations of the ancient cities of Harappa and Mohenjo-Daro in the Indus Valley in what is now Pakistan. Grinding stones were found that contained traces of mustard seed, cumin, saffron, fennel, and tamarind. Since all of these spices appear in curries, it is not unreasonable to assume that the ancient Indus Valley people were cooking with curry spices forty-five hundred years ago — although no recipes survive.

“Many people consider them [inhabitants of Mohenjo-Daro, called the Harappa culture] the world’s first gourmets and creative cooks,” writes William Laas in Cuisines of the Eastern World. “Their achievements may be measured by the fact that their seasonings were adopted by all who came after them.”

One of the first written mentions of curry-style cookery is attributed to Athenaeus, a Greek miscellanist who lived about A.D. 200. In his Deipnosophistai (The Gastronomers), a fascinating survey of classical food and dining habits, he quotes Megasthenes, the fourth-century-B.C. author of Indica: “Among the Indians at a banquet a table is set before each individual. . . and on the table is placed a golden dish, in which they first throw boiled rice . .. and then they add many sorts of meat dressed after the Indian fashion.”

“The Indian fashion,” as mentioned by Megasthenes, has sparked most of the curry controversies, because some writers and cooks believe that it has been stolen and ruined by the rest of the world, especially by the English. Other writers think that notion is nonsense, and they believe that cookery continues to evolve as the world shrinks. In fact, there are multitudinous definitions and beliefs about curry, and rarely do two writers agree on precisely what curry is.

M.F.K. Fisher, the famous gastronome, disagrees with the curry-powder-stew concept, believing the preparation of curries to be a high art: “Books about curries, for instance,” she writes, are published continually, with the success of a well-ticking clock. Special restaurants all over the world serve nothing but curries. Spice merchants grow rich on making their regional and private blends of curry powder. In other words, reputations can and do depend upon the authenticity of the recipe first and then of the powder that goes with the sauce, the skill with which the sauce is made, and in many cases the atmosphere in which the whole is served.

Some curry lovers carry things too far. “The word curry is magic,” gushes William Kaufman in his book The Art of India’s Cookery. “Its mention conjures up for us the romance and mystery of the far-off land of the Taj Mahal. The best way to create the Indian atmosphere is to perfume your house with curries.”

His comment may have some truth, but the worship of curry irritates famed Indian chef and author Madhur Jaffrey, who writes in her book An Invitation to Indian Cooking: “To me the word ‘curry’ is as degrading to India’s great cuisine as the term ‘chop suey’ was to China’s. If ‘curry’ is an oversimplified name for an ancient cuisine, then ‘curry powder’ attempts to oversimplify (and destroy) the cuisine itself.”

Although Jaffrey may call the word “curry” degrading, actually it is not meant to be insulting. The term reflects the evolution of language, and the need to designate, in English, dishes that were based on various spice mixtures. Indeed, “curry” has come to mean, in English, different spice mixtures that are used in a similar manner in countries throughout the world. “Curry,” explains Yohanni Johns, author of Dishes from Indonesia, “is a word frequently used by foreigners to describe Indonesian dishes cooked with coconut milk. ’ ’ Santha Rama Rau, author of the Time-Life book about Indian cooking, says that the “proper sense” of the word is “a highly seasoned stew with plenty of sauce.”

There is even controversy over the etymology of the word itself. Most sources attribute it to a British colonial corruption of the Tamil (South Indian) word kari, meaning sauce. Indian food expert Julie Sahni notes that kari is also a shortened version of kari-pulia, or kari leaves, meaning the leaves of the curry plant, Murray a koenigii, a common ingredient in Indian curry blends.

But other writers disagree with the kari origin of curry. Dhar- amjit Singh, author of Classic Cooking from India, writes that “curry is a word that comes from the Hindustani: turcarri. In the colloquial it is shortened to ‘turri,’ which in Anglo-Saxon usage is called ‘curry.’ ” William Laas agrees with this etymology. Other authors believe that the word is derived from karhai, a wok-like metal implement made of silvered brass in which curried dishes are cooked, or from khari (sometimes khadi), a soup made with buttermilk and chickpea flour.

Julie Sahni claims that curry is derived from curryup, an ancient Tamil word for blackened or crisp-fried, noting that curryi is Tamil for uncooked vegetables. She concludes: “Curry powder was thus originally the seasoning blend used for flavoring fried vegetables.”

Photo by Shantanu Pal from Pexels
The following two tabs change content below.